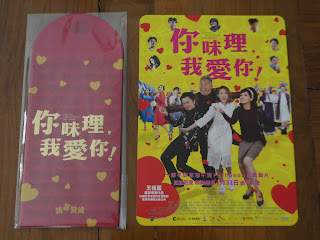 
I love you, you're perfect, now change.  That sentence sounds pretty weird, yet was used as the title for what went on to become a very successful musical play which had its premiere in the USA but has gone on to be performed in a number of diverse territories.  And now that theatrical work has been adapted into a Hong Kong movie whose English title has an exclamation mark at the end and six character Chinese title is several syllables shorter.


Back in 2005, the Windmill Grass Theatre staged a local adaptation of the musical theatre production featuring Cantonese language lyrics by one Wong Cho Lam.  Fourteen years on, the entertainer is the director, co-scriptwriter and one of the main stars of I Love You, You're Perfect, Now Change!, a HK$20 million movie whose cast's eagerness to please along with its large size and multi-generational nature is entirely characteristic of Hong Kong movies released to entertain cinema-goers over Chinese New Year.


Still, it's not unlikely that, at one or more points during your viewing of the film, you might want to ask "What the hell am I watching?"  For rather than have a fairly conventional Chinese New Year story involving such as a multi-generational family along the lines of those found in the classic All's Well, Ends Well (1992), I Love You, You're Perfect, Now Change! actually comprises a series of vignettes that all have to do with love together with romantic or sexual dissatisfaction in one way or another but otherwise aren't all that obviously related to one another.

Early on in this movie that's filled with familiar and welcome faces, there's a hilarious segment set in a cinema and featuring Alex Fong Lik Sun and Ivana Wong playing a couple on a movie date.  Soon afterwards, the scene changes to Tai Po Waterfront Park, where another couple -- this one played by Wong Cho Lam and Joey Yung -- have just finished playing a bout of tennis which left one of them with a black eye.  Later vignettes include ones that take place in settings as disparate as a restaurant, a church, something that's a cross between a prison and the underworld, and a funeral parlor -- and adding to the craziness of it all is that Ivana Wong, Wong Cho Lam, Eric Tsang and Teresa Mo play multiple unconnected characters in the film!
In view of its scatty as well as sketchy structure, it probably was inevitable that I Love You, You're Perfect, Now Change! would be uneven in quality; with some segments falling flat and leaving the audience stone-faced even while others (including that which has Sammi Cheng stealing the show for the second Chinese New Year movie season in a row) were super successful in getting a number of us laughing loudly and a lot.  At the same time, the movie actually would have benefited from being less unvaryingly loud in tone and volume.  As it was, the scene in this offering that most resonated -- featuring an extremely sincere performance by Teresa Mo -- was the one that was the most low-key as well as dramatic.


A measure of how consistently and over-the-top noisy this movie is should be evident by it literally giving me a headache that got me popping ibuprofen after the screening. Nonetheless, I do not regret having checked out I Love You, You're Perfect, Now Change!  This might say something about my masochism but may well speak more to my feeling that this festive cinematic fare does have enough entertaining bits to please its audience, especially those all ready to have a good time when the Chinese New Year of the Pig comes along!

Just stop by to say "Hello" hope all is well

All's well, thanks... and am busy getting ready for Chinese New Year! :)

I wonder if you have had a chance to see the other Chinese New Year films yet.

I saw 'Missbehaviour' today. Some of the jokes don't work but I did find myself enjoying it nevertheless.

I did some movie viewing over the weekend but not of Chinese New Year movies. The next one I'll be viewing is "Missbehaviour": have got a ticket for a Thursday screening of it, and am glad to hear that you enjoyed that movie.

I'm also hoping to catch a screening of "A Lifetime Treasure" at some point in the near future but probably will give "The New King of Comedy" a miss. How about with you?

'Missbehaviour' is enjoyable but not as funny as 'Vulgaria' or as layered as the 'Love in a Puff' trilogy, but it does again illustrate director Pang Ho Cheung's wit and skill at storytelling. It's the only CNY film screening in my part of the world at the moment.

I thought you were looking forward to 'The New King of Comedy'. What has changed your mind? The terrible trailer, or early (presumably negative) buzz?

Thanks, and kung hei fatt choi to you!

Hmmm re your comments re "Missbehaviour" and the other Pang Ho Cheung films because, among other things, I actually didn't care all that much for the first and third movies in the "Love in a Puff" trilogy! Interesting that it's the only CNY film screening in your part of the world. I guess it's because it's the Hong Kong one with the most big name director -- and from this comment, I think you'll gather why I now am now looking forward to checking out "The New King of Comedy". Put another way: I think that, despite being helmed by Stephen Chow, that last mentioned film is far more of a Mainland Chinese than Hong Kong movie.