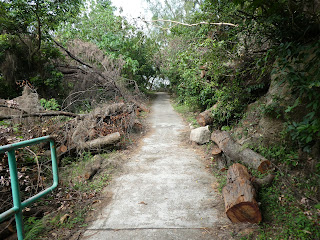 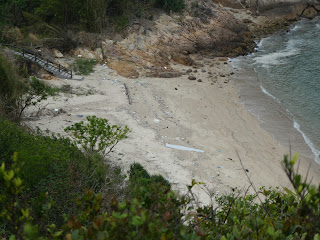 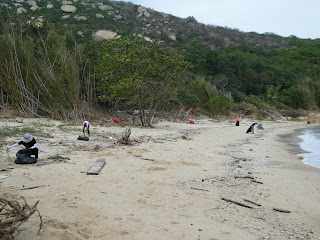 
A couple of weeks after Typhoon Mangkhut struck, the beach clean-up group I organize went and worked on Cheung Chau's Tai Kwai Wan one Saturday.  After ascertaining that the typhoon debris had been cleared so that the path to our usual beach clean-up spot was open once more though, we returned to Tung Wan Tsai (Coral Beach) over on the other side of the island, where the currents look to bring over far more trash than any of the other Cheung Chau beaches I've been on.

The sight that greeted my party of eleven last month was expectedly horrific, with large amounts of trash strewn all over the beach and also higher up it and the rocks in the surrounding area than I had previously seen.  Still, I reckon we made a good dent of the trash on the beach on a day when the sun shone so brightly that I ended up getting sunburned (but didn't realize it until later in the day when a couple of friends remarked that I was looking on the red side and I saw that it was indeed so!).


So it was quite a bit of a shock to return yesterday and see trash strewn on a good swathe of Tung Wan Tsai once more; and this especially so since there hadn't been any typhoon or even major storm occur in the past month.  Making our task feel truly Sisyphean, more trash kept on being washed ashore by the waves as my group (smaller this time around than the previous month but supplemented by a Cheung Chau resident who happened on us at the beach!) went about picking up bits of trash that ranged from the pretty sizable to small but still recognizably plastic and, in fact, after we decided to call it a day to head off for lunch.


Whereas I previously would make a point to pick up glass shards as well as plastic items, I tend to focus these days on getting as much plastic and styrofoam off the beach (and back into the water courtesy of the tides).  One reason is that I've seen how plastic -- even those that appear on the solid side at first -- and styrofoam can break up into tiny pieces that are frustratingly difficult to sort from sand and also am super aware that those plastic microparticles get eaten by so many fish.  And then there are all those plastic bags that, when floating in the water, resemble the jellyfish that a number of marine creatures (including whales and sea turtles) feed on.


Something else that was in abundance on the beach (including half buried in the sand and often hard to dig out) yesterday, and which I also have come to abhor, are ghost nets.  Truly, I find it difficult to understand how the fishing community can be so irresponsible and uncaring of the sea when its very health is so important to their livelihood.  And yet, time and time again, I see evidence of this at beach clean-ups and can only wonder what it will take to make these people wake up and see that they are contributing to the depletion of what they are able to catch and make money from doing so.

On a positive note, I've been pleasantly surprised by the number of times now that a stranger or two walking on to this pretty secluded beach, that's some distance -- and a hike away -- from the famous Cheung Chau sights, and seeing our beach clean-up in progress has stopped to help out.  Of course there also have been those folks who've blithely strolled past up without so much as a word or even those who've come up close to find out what we were picking up and then walked off after discovering that it was only trash!  But I take heart in the existence of the more good-hearted folks I've seen at Tung Wan Tsai -- and also those who sign up to work on what can seem like a futile task (and more than once too, as was the case with everyone who did so for yesterday's beach clean-up)!
Posted by YTSL at 11:14 PM

I know a lady here in North Idaho takes a small bag with her and when she does her walk she fills up her bag of trash and then she heads back home.
Nothing like killing two birds in one stone.
Coffee is on

Quite a few people do this while out hiking these days in Hong Kong. I must admit to not having done that yet. Instead, I hike to a beach to clean it (and then back to civilization afterwards)!