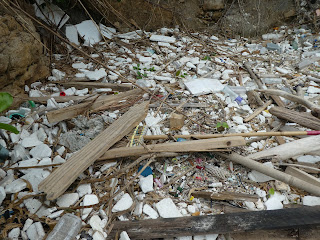 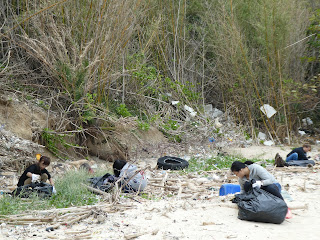 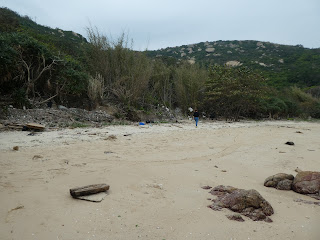 Still trash strewn but actually less so than a few hours previously!
I (still) like Cheung Chau a lot.  This even though, these days, I tend to associate it more with dirty beaches in need in tender loving care than the idyllic walks or hikes amidst photogenic scenery and seafood lunches that I've enjoyed in the past there but actually haven't been to the island for in a while.
Instead, when I've been over to Cheung Chau these last couple of years, it's been to take part in beach clean-ups: once at Pak Tso Wan (AKA Italian Beach) down on the southwest section of the island but mainly at the even more out-of-the-way Tung Wan Tsai (AKA Coral Beach) over on the northeast section of Cheung Chau.  The one time that we held the beach clean-up at Pak Tso Wan, I had the surreal experience of seeing people opting to frolic about in its waters while the group I was with focused on picking up the trash that had been strewn about on the beach.
Alternatively, I've never seen anyone going for a swim in the waters of Tung Wan Tsai.  I'd like to think that it's because anyone would find the large amounts of trash on its beach to be disturbingly off-putting.  But, if truth be told, I think it's more likely so that this particular beach really is off the beaten path for residents of, and visitors to, the island alike; this not least since getting there (and out of there) requires a bit of a hike up and down a small but steep hill.
As I've pointed out to more than one person, Tung Wan Tsai's off-the-beaten-path location also makes it far more likely that the trash we see on its beach has been washed ashore rather than was dumped there by island residents.  And, actually, the type of rubbish strewn on its beaches also does strongly indicate that it's marine debris brought there by the currents -- and from as far away as Mainland Chinese waters (since quite a lot of the plastic waste, which includes cigarette lighters along with food containers, have Simplified Chinese writing on them and identifying marks that quite clearly indicate the product's origins having been Shenzhen).
This is not to say though that Hong Kongers can be totally let off the hook when it comes to polluting the waters and, associatedly, the beaches too.  And, strangely to my mind, it seems that one of those groups who would seem to stand to lose the most from Hong Kong's waters being badly polluted may well be among its worst polluters.
For the record: I'm not making this allegation lightly.  Rather, when you consider that a high percentage of the trash found on Tung Wan Tsai is styrofoam of the sort that makes up the boxes that seafood gets transported in, I think it's safe to conclude that those who make their living fishing in Hong Kong's waters actually contribute quite a bit to this area's marine pollution.  And then there's the "ghost nets" that have washed ashore and been half buried in the sand or stuck on the rocks at the water's edge which -- I do thank goodness for small mercies -- thus are at least no longer in the water continuing to trap sea life long after they no longer have are of any use to any fishing folk.
In all honesty, I find it really perplexing that those who make their living from the sea seem to care so little about the health of the sea.  By the same token, it's rather frustrating that, thus far, all but one participant in the beach clean-ups I've taken part in on Cheung Chau has actually been a resident of the island (and that woman concerned is actually a native of Japan rather than a long-term local)!
Looking on the bright side though: it's actually quite astonishing from how far away the beach clean-up participants have come.  Unexpectedly, I've made the acquaintance of tourists visiting from the USA, flight crew from Kazakhstan and exchange students from Germany by way of these beach clean-ups in Hong Kong.  And one also shouldn't scoff at the undertaking and sacrifice involved for people living as far away as Tuen Mun, Sheung Shui and Tseung Kwan O to get up early on a Saturday morning to make it to these beach clean-ups in a far corner of Cheung Chau! ;b
Posted by YTSL at 11:13 PM