The artistic in the everyday in Hong Kong? 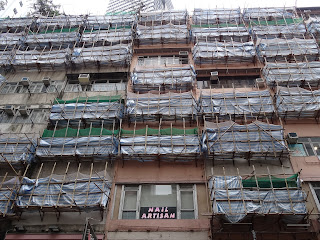 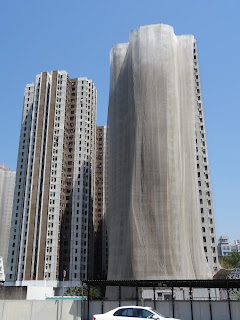 A building waiting to emerge from its cocoon
looking all refreshed, like its neighbor ;)


More than once when moving around in Hong Kong, I've been reminded of something an artist friend once told me: i.e., that it can feel hard to compete artistically with what's considered everyday by local folks.  There are times when his words come to mind when beholding beauty in nature (be it in the form of natural formations, flowers, birds or bugs).  But I actually remember him specifically talking about human-made objects that could be easily mistaken for installation or "found" art but actually were around for fairly mundane reasons -- and there are indeed occasions when glancing around Hong Kong's urbanscape that I definitely see what he means!


Take, as an example, the bamboo scaffolding used here in Hong Kong -- but few other places in the world -- which, with its attendant nylon wrappings (used to ensure that debris doesn't fall onto the nearby streets), could easily be mistaken for the work of Christo and Jeanne-Claude.  I wouldn't be surprised if every camera-totting tourist to the Big Lychee comes away with at least one photo of these temporary structures that spring up at construction sites and wrap around buildings whose exteriors require renovating.  (After all, I took my share of such pictures in the years when I was a visitor here rather than a resident!)


Even after spending years living in Hong Kong, they -- and the spiderman-like workers who construct and clamber about them -- remain a source of wonder to me. However visually astounding the bamboo scaffolding and associated nylon mesh or sheets that wraps around building exteriors are to look at from the street (or nearby buildings) though, I do count myself very fortunate that I've not had to live in a building when it actually had the scaffolding and wraps all over it.

Among other things, whatever views you have from your window and sense of privacy you have while inside your apartment would be missing for weeks, if not months.  So even the thought that your cocooned building will emerge stronger as well as better looking after that work's done -- or that it looks like a large-scale art work -- may seem like scant consolation during that renovation period which also would be undoubtedly pretty noisy!
Posted by YTSL at 9:42 PM

I don't believe I every seen a building going up or remodel in cocoon.
Coffee is on

I think the cocooning is necessary in Hong Kong because the buildings are so frequently close to the streets (on which vehicles and pedestrians pass along) as well to one another. Otherwise, construction debris would fall and hit people, etc.!