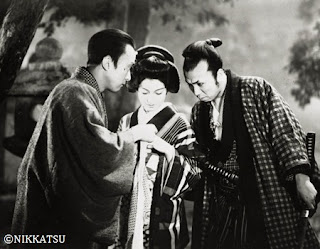 Priest of Darkness (Japan, 1936)
- Sadao Yamanaka, director and co-scriptwriter (along with Shintaro Mimura)
- Starring: Chojuro Kawasaki, Kanemon Nakamura, Shizue Yamagishi, Setsuko Hara, Daisuke Kato
Its English title makes it sound like it'd be a horror flick but Sadao Yamanaka's Priest of Darkness actually is a jidaigeki (period drama) based on a kabuki play by Mokuami Kawatake.  One of only three out of the 26 or so films directed by Yamanaka that have survived destruction (on the orders before 1945 of the Japanese government, and after World War II by General Douglas MacArthur), it was made in 1936: one year before the filmmaker revered by the likes of Yasujiro Ozu and Akira Kurosawa was drafted into the Imperial Japanese Army; and two years before his death in a field hospital in what was then Japanese-ruled Manchukuo when he was just 28 years of age.
The oldest Japanese film I've ever seen harks back to even older times, seeing as it's set in a feudal Japan where samurai -- both those with a master, and ronin -- roam the streets of a city where dirt covered roads are more the rule than paved ones, and the loss of a prized sword could get a man to contemplate suicide.  An ensemble piece with a convoluted plot, it's not the easiest of films to follow -- not least because it looks to have some frames missing at various points -- but has some interesting characters whose paths intersect in ways that contemporary urbanites can well understand.
The Japanese title of Priest of Darkness (also) is the name of the story's main character, Kochiyama Soshun (Chojuro Kawasaki).  Dressed as a priest when he first appears in the film, Kochiyama actually is a professional swindler -- while Oshizu (Shizue Yamagishi), the woman he shacks up with, runs a gambling joint on the upper floor of her home and a bar on the ground floor.
Among the patrons of the gambling joint is Hirotaro, an immature ne'er-do-well who gets himself into particular trouble after he steals a samurai's tanto (short blade) and trying to elope with a geisha.  With their parents presumably deceased, Hirotaro's elder sister, Onami (Setsuko Hara) tries as best as she can to be her brother's keeper.  But even with the help of Kochiyama and a ronin named Kaneko (Kanemon Nakamura), the best of whose nature she manages to bring out, she finds it hard-going; especially after the innocent seller of sweet sake inadvertently triggers the jealousy of another woman.
Just 16 years old when she appeared in Priest of Darkness, Setsuko Hara acquits herself well in a cast that consists of mainly older and more experienced thespians, some of whom were members of the left-wing Zenshin-za theatre troupe that the Japanese authorities didn't approve too much of.  Even when in uncharacteristic period garb and a big wig, she's immediately recognizable; possessing an air and luminosity that lights up every scene she's in and incredibly adept at portraying the kind of woman that most men (and some women) would not hesitate to admire, trust and go to the assistance of!
Consequently, despite her part being not all that big, I can totally understand why this film -- and, for that matter, The End of Summer -- was included in the HK Cine Fan's ongoing tribute program to the late actress.  Put another way: this is a good pick to show that, like just about the only other actress whose charismatic presence has bowled me over even more than Setsuko Hara, she looked to have to be one of those thespians with natural talent that was apparent pretty much from the start.
On a more general note: I'm also grateful to this film for introducing me to the talents of a bunch of other folks whose existence I have to confess to not having previously been aware of.  And while it's saddening to find out, even so many years after the fact, what happened to Sadao Yamanaka and the majority of his cinematic output, it is actually pretty cool to discover that there are pretty watchable pre-Second World War Japanese movies still available to be seen -- and that they can contain expressions of laudable humanity rather than alien hatreds.
My rating for this film: 7.5
Posted by YTSL at 7:13 PM

Sadao Yamanaka's death was an enormous loss to Japanese cinema. Had he not been sent to the Manchurian front I have no doubt he would have made as significant a contribution to the development of Japanese film as Mizoguchi or Ozu.

My client loves horror show. There starting to replay the old Gothic Soap Opera "Dark Shadow"
and hopeful I get some watching in.
Coffee is on

"Priest of Darkness" is supposed to be the weakest of Sadao Yamanaka's three existing films -- and yet I found it pretty enthralling. So I totally can see why lots of people rue his premature death and reckon that he would easily be a giant of Japanese cinema if he had lived for as long as the likes of Ozu and Mizoguchi.

I actually am not a fan of (supernatural) horror. So I was pleased to find that "Priest of Darkness" was actually a drama!