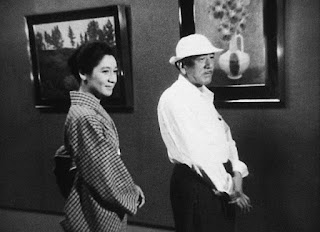 Setsuko Hara and Yazujiro Ozu, on one of the sets
of the last of six films they made together

In late November last year, the shock news was delivered to the world that Setsuko Hara had passed away on September 5th but her family, as per her direction, had not made a public announcement as to her demise until after more than two months had passed.  It may seem strange for someone who never met her to feel so impacted by the death of a 95-year-old woman -- at least until you see Setsuko Hara bestow her luminous presence onto a film.  And no matter that the last movie she appeared in was back in 1962; after which she retired from public view as well as acting when she was just 43 years of age.

Although she worked with other directors (including Akira Kurosawa, Mikio Naruse and Keisuke Kinoshita), Setsuko Hara is most associated with Yazujiro Ozu, the master auteur who directed her in six films, including Tokyo Story, the bittersweet 1953 offering widely looked upon as his masterpiece.  Despite not being its main star, the general feeling is that Setsuko Hara plays a big part in making this film the beloved as well as much admired work that it is.

As with Tokyo Story, the last of six films which Ozu and the actress often described as his muse both worked on is an ensemble effort in which she doesn't have a large role.  But whenever she's on screen in The End of Summer, it's very hard to take your eyes off her.  And, when viewed with the knowledge that the woman known as The Eternal Virgin retired just two years after making this film, certain wishes that her character express in it (e.g., a wish to follow her heart in the midst of family pressure and stay single for the rest of her days) take on a poignancy that those who viewed this offering on its original release may not have felt.

In what also turned out to be Ozu's penultimate film, Setsuko Hara plays Akiko, the widowed daughter-in-law of Kohayagawa Manbei (Ganjiro Nakamura), a fun-loving sake brewery owner who latterly leaves much of the actual work to Hisao (Keiju Kobayashi), the husband of his elder daughter Fumiko (Michiyo Aratama), and others.  As is often the case in Ozu's films (including Late Autumn, another Ozu-Setsuko Hara collaboration), the married folk seem to get uncommonly interested in finding a man for women without husbands, even widows who previously did so.

Ironically, while Akiko and Kohayagawa's younger daughter, Noriko (Yoko Tsukasa), don't seem in a hurry to have suitors found for them, the family patriarch has been pursuing a woman from the past on the sly.  On the one hand, there seems no harm in Kohayagawa seeing Sasaki (Chieko Naniwa) now that he's a widower.  On the other hand, Fumiko, for one is not prepared to accept the woman who was Kohayagawa's mistress when her mother was alive into the family any time soon; and this especially in view of the possibility that Sasaki's adult daughter, Yuriko (Reiko Dan), also may be his.

The End of Summer's title and storyline point to tragedy befalling in the film; and it's indeed the case that tragedy does strike in the form of an important character's untimely death.  But along with memorable funeral scenes and another contemplative sequence in which two people discuss the cycle of life while, at one point, watching smoke rising from a crematorium's chimney, there also are moments in the movie which are considerably lighter feeling.

And probably not all that surprisingly, the most enjoyable scenes in the film are ones in which Setsuko Hara figures.  In particular, it's beautiful to see sisters-in-law Akiko and Noriko have such a warm and trusting relationship, and thus be able to confide in each other and express their feelings in ways that are so sincere as well as thoughtful.  In a world where many people appear to believe that marriage is the be all and end all, leave it to two people who never married (Ozu as well as Setsuko Hara) to show that other types of relationships can be caring and loving too.
My rating for this film: 8.0
Posted by YTSL at 11:55 PM

Interesting post and I liked the last sentence a lot.

Thanks for reading and appreciating! I'm glad you like the sentence with which I wrapped up the review. :)