Encounters with sword-wielding giant frogs, ninja and a woman warrior in Matsumoto 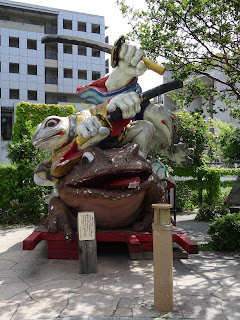 Not a sight one expects to see on one's way
to go see a historic castle! 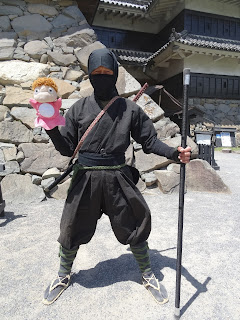 And what are the odds of seeing Puppet Ponyo
posing with a ninja in the grounds of Matsumoto-jo?! 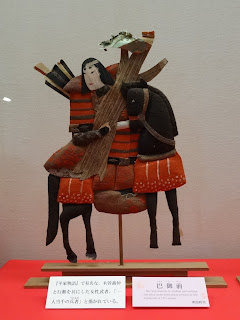 Seemingly improbable as well was finding this
cool representation of a celebrated woman warrior
on display in the city museum! :b


On the morning of the fifth day of my recent Japan trip, I headed over on foot to the city of Matsumoto's main attraction: Matsumoto-jo -- the brooding black Crow Castle to Himeji's soaring White Heron Castle.  Contrary to earlier weather forecasts, it was absolutely beautiful, with bright sunshine and blue skies making everything look as fresh as the mountain breezes blowing through town made the air feel.  And adding to the enjoyable quotient of my stroll along Honmachi Street was that there were many interesting sights, including a statue here, a colorful manhole there, and even a well or more from which one could freely drink natural spring water.


One of the more unusual sights I came across on my way to Matsumoto Castle was the large statue of two sword-wielding frogs mounted atop a larger but still more natural-looking amphibian  Marking the entrance to an Edo-era-themed shopping street officially called Nawate Dori but popularly known as Frog Street, its froggy connection came about after the street's shopkeepers realized and made the most of the Japanese word for "to buy" (kaeru) sounding like the Japanese word for "frog" (kaeru) as well as "return home safely" (kaeru)!


In the grounds of Matsumoto-jo, I had more unexpected encounters -- including with a ninja hanging about by the entrance to the castle.  Interestingly, while Japanese visitors enthusiastically ran up to pose for picures with him, the foreign tourists seemed more inclined to steer clear of him by and large!  As for Puppet Ponyo: well, she's originally from Japan after all; so of course she was happy to pose with the ninja.  After all, she had managed to emerge unscathed from her previous encounters with them (in Kyoto and, more recently, Togakushi)!


And while it already was a pretty big surprise to see a number of women dressed up as old time warriors at Hotaka Shrine the day before, it floored me even more to come across a representation of a woman warrior at the Matsumoto City Museum located in a corner of the castle grounds along with text enigmatically describing her thus: "She was superior in wisdom and courage and often made meritorious services in war during the late of [sic] 12th century".

Although her name was not written out in Romaji, it wasn't too difficult to find out via Google that the lady in question was Tomoe Gozen.  A real life historical personality skilled in archery, swordsmanship and horsemanship, she is credited with some incredible exploits on the battlefield (such as leading a 1,000-strong cavalry to victory at the Battle of Tonamiya, and personally defeating famed strongman Onda no Hachiro in another battle).  It's a wonder that films haven't been made about this female samurai the way they have been with ancient China's Hua Mulan and the Yang Women Warriors, or France's Joan of Arc.  For surely her epic-worthy life story (or legend) would make one heck of a movie?!
Posted by YTSL at 6:30 PM