An earth-shaking evening at Bar Albatross 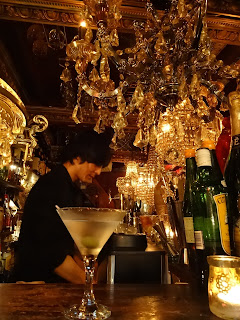 Yes, I like vodka martinis -- and preferably
in bars with character ;) 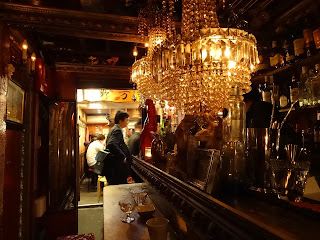 This is the kind of bar where it's not only fun to look around
inside but also out at the passing foot traffic :)


I wasn't ready to call it a night after my delicious eel dinner at Kabuto.  Rather, I wanted something else to cap my long day had begun hundreds of kilometers over in Matsumoto and included a more than two hour train ride past lots of mountains and flooded rice fields to get to Tokyo.  More specifically, I figured a cocktail or two would be just the ticket -- and as it turned out, I didn't have to go to far to avail myself of that.  Indeed, I just needed to walk a few paces to the bar next door -- but a world away in terms of decor and atmosphere!


Although it looks pretty unique, the Bar Albatross in Omoide Yokocho actually is the cousin of two other bars with the same name -- and apparently similarly decorated -- over at the Golden Gai, on the other side of the Shinjuku train tracks.  But while there may be two other bars that look like it over there, I'd say that it's one of a kind as far as Omoide Yokocho goes; what with the area being dominated by smokey yakitori-ya more than anything else, and the Bar Albatross being located in a three-storey building rather a building with just one floor.


In view of Omoide Yokocho not being associated with high class drinks, I decided to order something that I figure it'd be hard for the bartender to screw up first at Bar Albatross.  Unfortunately, all those Vespers I've had at Bar Butler have made vodka martinis -- even well made ones -- seem too ordinary.  So for my second drink at this actually pretty quiet bar, I went for another cocktail that I've been introduced to at Butler: The Last Word.


As I was enjoying this very pleasant-tasting cocktail that contains chartreuse as well as gin, there was a bit of a kerfuffle caused by a French-accented customer thinking he was being cheated when he got the bill, not realizing that -- like pretty much all Japanese bars -- Bar Albatross has a cover charge (even while not imposing a service charge).  With explanations from the bar staff seeming to infuriate him, I figured it wouldn't hurt -- and might even help -- for me to butt in to explain things to him.  And, actually, he did calm down after my intervention; I guess because he saw me both as a fellow customer but also (mistakenly) as Japanese!


After that issue was resolved and some calm had returned, we experienced a different kind of disturbance: one caused by Mother Nature and coming in the form of the earth -- and structures erected on it -- shaking quite a bit for a few tense seconds, during which the bartender stood close to the drinks cabinets on the wall and stretched his arms out to make sure that the bottles of alcohol in them would not come tumbling down!  Meanwhile, my thoughts were along the lines of "I sure hope none of the chandeliers in this bar are going to come crashing down, especially those hanging above me!"

Even while the shaking had gone on for longer than on any of the other occasions when I've literally had earth-shaking experiences, I thought it was just a minor tremor rather than an actual earthquake.  In retrospect, I think it was due to how calm the people I was with were during those few seconds when the earth moved beneath our feet.  And in any event, it wasn't until a friend told me the next day that a magnitude 5.6 earthquake had rocked eastern Japan that I realized that I actually had experienced the strongest earthquake thus far in my life that evening! ;b
Posted by YTSL at 11:32 PM

Hmmmm...... a 5.6 Magnitude quake...... I was lucky (or unfortunate) to experience the 7-ish Quake in the Mojavi Desert back in 2000 while I was in L.A. I was on the 11th floor of an apartment block downtown. It happened in the small hours when I was in bed. It was like being shaking horizontally for almost a minute. If I was standing or sitting on a chair then I would have fallen onto the floor. I don't know a strong quake could be that noisy. If someone was in one of the high rise office buildings on upper floors the shaking would be really scary.

Fortunately no serious damage was inflicted to residents that time. As far as I could recall there seemed to be no deaths with some unfortunate souls with cuts and broken bones.

Yikes re your experience! I think you and the people in the area can count yourselves very fortunate there were no deaths as a 7-ish earthquake is considered a major one! :O

But I just looked up the list of California earthquakes and in 2000, it seemed the largest one was "just" magnitude 5.0...

Aah, okay. And again, wow, you guys were lucky to not suffer any major injuries, etc.!