A hike that began in bright sunshine but only ended after dark! (Photo-essay)

As the temperatures rise during the hot summer months, a number of folks in Hong Kong take to hiking in the late afternoon and even after dark, when it gets to a few degrees cooler than at midday.  I, on the other hand, am one of those people who tries to avoid being on a hiking trail after the sun goes down -- and consider it a good thing that, to date, the number of times that I ended a hike that began in bright daylight only after it got dark is not more than five!

Fortunately, each time this has happened, my party actually had finished the most difficult part of the trek.  Even so, it really is such a relief when one reaches a section of trail close enough to a village to see lights shining from within the houses and know that, more often than not, transportation back to the city also is nearby... 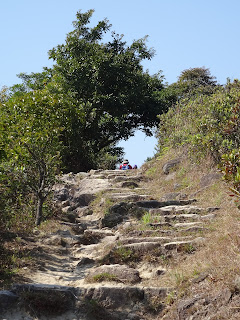 The sun was shining and the sky was blue when
we hiked along the early, ascending portion
of the Maclehose Trail's scenic Section 3 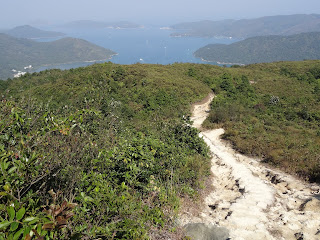 As ever, it was well nigh impossible to not pause at various points
to enjoy at the splendid views to be had along the way :b 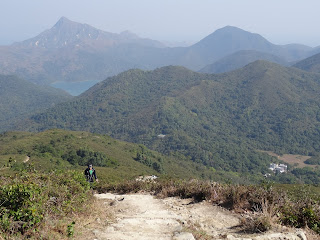 If nothing else, looking back at how far one already
has climbed can make one feel encouraged... 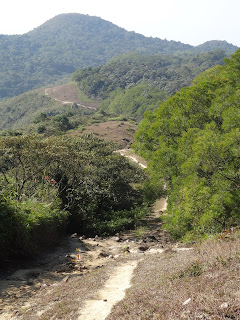 ...an encouragement is what one could do with when
faced with still more kilometers of hilly trails that day ;) 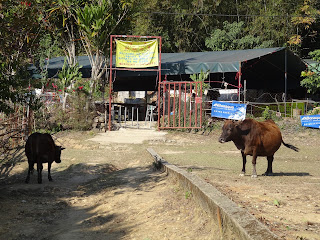 At the Hui Lam Store at Cheung Sheung plateau, hikers can
get a bite to eat, something to drink, or just rest for a bit
like the cows who like to gather in the area 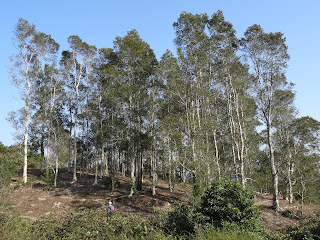 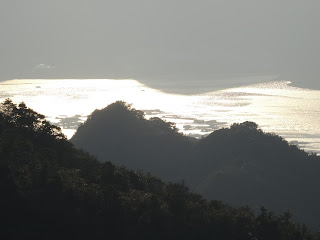 While struggling through a section of trail that was more challenging
than had been anticipated, we saw shadows lengthen and the landscape
darken -- but still couldn't help admiring the beauty of it all! :O 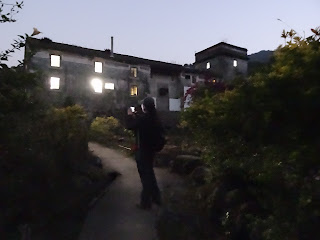 It was pretty dark by the time we got to Pak Sha O but we still
couldn't resist snapping shots of the picturesque village all the same! :)
Posted by YTSL at 8:22 PM

If you know the route and is familiar with every twist and turn of it, there is not too much a concern hiking after dark. Maybe except from accidentally stepping on cow cakes, or bumping face first into spider webs, or close quarters snake or wild boar encounters..... (yikes).

Anyway, always bring a working torch light and a whistle with you even on hikes in broad day light. (I always bring at least two. A head light and a handheld torch). Sometimes, if you want to see the stars you just have to go out into the darkness.

Because of the wild critters about in Hong Kong, I'd not feel entirely comofortable hiking after dark in Hong Kong -- unless the trails have street lamps, like part of Hong Kong Trail Section 1 (i.e., the section that's part of the Circular Peak Walk).

Re seeing stars in Hong Kong: I think I've only done that once -- out in Tai Mei Tuk (where I was enjoying a BBQ with friends) one night! :)

Wow, what a great hike. I am in awe of your hikes and correct me if I'm wrong. You seem to hike from late morning to later afternoon and very occasionally into the early evening. And there seems to be no overhead coverage. This impresses me much as the ups and downs of your hiking adventures. And you hike in summer too!

Living in Vermont in the northeast USA I can't imagine hiking in the woods without overhead coverage and not in the temperatures you do. However I will admit I am not good in direct sunlight and temperatures above 25 C would have me as a french fry on the ground. I think this is why I enjoy your hiking blogs so much. Sometime when I look at your wonderful photos I think to myself......that place there on the photo is where I would pass out from the heat.....I would like to think I could continue on for the fun suppers you sometimes enjoy.

I usually start hiking in the early afternoon and then hike to the late afternoon. And, actually, some trails do have quite a bit of overhead coverage -- and those I make a point to go on in the summer months (along with such as the Nei Lak Shan Country Trail which is on higher ground, and thus cooler than other parts of Hong Kong).

Teehee at the image of your turning into a french fry and deciding where during my hikes you'd pass out from the heat! I admit that there has been at least one occasion that I feared that I was going to get heat stroke/exhaustion and a few that I did wonder if that was happening to the people I was hiking with. Honestly though, I'm actually quite a cautious hiker and try not to overdo it or go someplace risky!