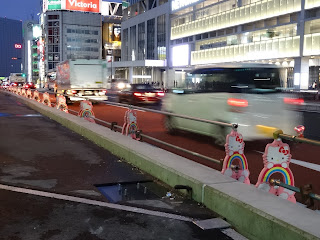 Your eyes are not deceiving you -- those are indeed
Hello Kitty-themed construction barricades! ;b 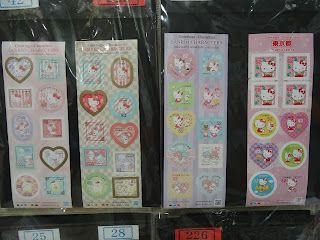 Spotted at a post office in Shinjuku: a variety of
Hello Kitty-themed postage stamps! :)
As regular visitors to this blog know, I enjoy making Hello Kitty spottings as much as I do wild critter spottings.  So it shouldn't be too much of a surprise to find out that one of the things I like about being in Japan is that I almost invariably will catch sight of Kitty Chan's visage at least once every day that I'm in the country where the headquarters of Sanrio, Hello Kitty's parent company, are located; and this without my having to do such as head over to Sanrio Puroland over in Tama Center (although I have indeed voluntarily done precisely this before).
Somewhat surprisingly though, my feeling is that I see more people wearing Hello Kitty-themed clothing in Hong Kong (the city with the same initials as the cute cat character) than in Japan itself, especially Tokyo (where it seems that people tend to eschew wearing clothing without any images on them, even when they're in casual attire).  And despite my having read of Funassyi's great popularity in recent years, I still was taken aback at having caught sight of the pear fairy from Funabashi's visage before Kitty Chan's on this recent Japan trip.
For the record: my first Funassyi sighting of this recent Japan trip came on the first day and came in the form of stickers someone not official had stuck on an escalator in Tokyo Station!  In contrast, everything I saw on this trip that bore the image of Hello Kitty was pretty pukka; with Kitty Chan being at her most official when helping keep roadside construction sites safe over by Shinjuku Station and being featured -- along with a few other Sanrio characters -- on Japanese postage stamps on sale at the country's post offices.
Although I've encountered kawaii construction barriers before in Japan, I must admit to still doing a double take when I came across those rows of Hello Kittys by the roadside over in Shinjuku one evening. And what made the whole thing funnier for me was how pretty much everyone else who passed by them treated them like it was the most natural thing in the world for them to be there.  Put another way: I seemed to be the only person gawking at -- and snappying photos -- of them!
As for the Sanrio-themed postage stamps: I guess I should have known better but I just had to get a Japan Post staff member to confirm that they're indeed real stamps rather than mere decorative stickers before purchasing a set -- not to use, of course, but "just" as a cool as well as kawaii souvenir! ;b
Posted by YTSL at 11:42 PM

I know a few people collect "Kitty". I've use the "Kitty" stickers to give away and decorated my pen pals letters and envelopes with.
Coffee is on

Wow, I didn't realize that you too are a fan of Kitty Chan! Thanks for letting me know that Hello Kitty has (adult) fans even in the Dakotas! :)