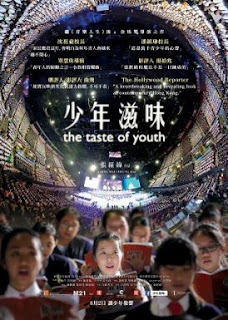 
Documentary filmmaker Cheung King Wai first caught the attention of many Hong Kong cinema-goers with KJ, his documentary about local music prodigy Wong Ka-Jeng that was my favorite Hong Kong movie of 2009 (the year which also saw the release of John Woo's historical epic Red Cliff 2 and the Peter Chan Ho-sun produced -- and, some say, ghost-directed -- blockbuster period actioner Bodyguards and Assassins).  And one year before, his debut feature, All's Right with the World, left a strong enough impact on me after I viewed this look at economically impoverished members of Hong Kong society at the 2008 Hong Kong International Film Festival that I've found myself recalling certain poignant moments in it from time to time over the years.


However, both the filmmaker and his third feature left me unimpressed after I viewed One Nation, Two Cities at the Hong Kong International Film Festival and was privy to the pre-screening revelation that the work about a Mainland Chinese woman forced to shuttle back and forth across the Hong Kong-Mainland Chinese border because of residency issues had been completed less than 24 hours before its world premiere and turned out to be 31 minutes shorter than its expected 100 minute length.  To top it off, at the post-screening Q&A, the director talked about how he had found the woman at the center of his documentary to be "commonly ordinary" and consequently, it was implied, actually not all that very interesting.


Upon re-reading what I had written about his third feature, it seems like the documentary filmmaker had not learnt his lesson, since his fourth documentary -- which is like KJ in once again largely focusing on musical youth, and also will bring to mind Ruby Yang's stirring My Voice, My Life (2014) -- looks to similarly suffer from not having been as well edited as it should have been.  And while it could have been said that Cheung King Wai had hedged his bets this time by having The Taste of Youth be about nine individuals rather than just one who turned out to not be all that charismatic (especially compared to KJ), the widening of his scope ended up making the technical deficiencies of the filmmaker and such as his co-editors even more apparent than previously.


In point of fact, The Taste of Youth actually begins promisingly, with visually impressive opening scenes shot at the world record-breaking Ode to Joy: Concert of Ten Thousand at the Hong Kong Coliseum in December 2014.  There we get our first glimpses of the young Hong Kongers at the heart of Cheung King Wai's latest offering: a couple of primary school students, six secondary students, and a 24-year-old volunteer; all of them participants at the music event that was taking place when Occupy Hong Kong was going on, and which looked to be geared towards making people feel hopeful and generally good about Hong Kong's youth and the(ir) future. (More than incidentally, the concert in question might be deemed by the likes of VIP attendees such as Chief Secretary Carrie Lam to be the antithesis of the Umbrella Movement which also had its share of students and volunteers in its ranks).


Employing a primarily talking heads-format, the filmmaker sets about getting his interviewees to reveal their feelings on a range of subjects, including the role music plays in their life, their views on what their life is like, and what they reckon the future holds.  Some of them appear at ease and playful in front of the camera; others are more guarded or at least formal.  A few of them say things that are wise beyond their years; at least one makes remarks that can come across as painfully pessimistic and cynical.

And one interviewee breaks down and cries -- and when she does so, you get a sense of how frustrating life (already) is for many of these post-1990s Hong Kongers; some of whose parents reckon their children have it so much better than them even while others see the many pressures that these young people (already) are under, and worry all the more for them because of this.


It may not be a baldly -- or, for that matter, boldly -- political work like Ten Years.  But The Taste of Youth certainly gets most of its impact from the political notes struck in it; be it visually (with such as the camera zooming in on items related to what happened in Mainland China in the summer of 1989 in one of the interviewees' home) or through such as a Mainland Chinese transplant's remarks about contemporary Hong Kongers' attitudes towards Mainlanders.


Yet even while certain individuals and what they have to say stand out in this work, it's hard to figure out why some of the others ended up being included in this project.  Put another way: the quality of the interviews is uneven; with some interviewees proving to be so unmemorable that it was hard for me to recall any pertinent details about them even just a couple of hours after viewing the film.


I have little doubt that The Taste of Youth would be a substantially better offering if it had been more selective with regards to its interviewees, including by having a smaller batch of individuals to focus on.  As it stands, this (too) ambitious effort feels overly sketchy and spread too thin for a 79 minute film; with there being frustrating gaps in information about certain of the profiled individuals (for example, it's never made clear if the 24-year-old interviewee actually has a job) as well as too many shifts from one subject to another that can confuse rather than truly enlighten.

YTSL, have you seen "Weeds on Fire" yet?

I'm hoping to catch a preview of it on Saturday! (FYI, "Weeds on Fire" will only get a theatrical release here in Hong Kong on August 25th!!)

I see. I saw some reviews popping up on-line and just assumed it has been released in HK!

"Weeds on Fire" had its world premiere at the Hong Kong International Film Festival, but its two HKIFF screenings were sold out before I could get tickets. It's also had one or two preview/HK Cinefan screenings recently -- but they didn't fit my schedule. I know it also screened at the Asian film festival in Udine. I am hoping I will like it (a lot)!

BTW, do you have any interest at all in Cheung King Fai's documentaries?

I remember. I asked you about that at the time of the HKIFF: http://webs-of-significance.blogspot.com.au/2016/04/fire-lees-robbery-made-me-boiling-mad.html

Do you think that "Weeds on Fire" will have the same success as "The Way We Dance", your top HK film in 2013? It seems like they are using similar strategies to release and promote the film.

As for Cheung King Fai's documentaries, I have only seen KJ and enjoyed it quite a lot.

As for Cheung King Fai's documentaries: I think there were hopes that "The Taste of Youth" would appeal to people the way "KJ" did but I don't think it's turned out to be the case since this new documentary is playing to packed audiences the way that "KJ" did for weeks, if not months.