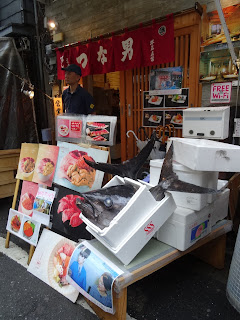 Eye-catching restaurant advertising at Tsukiji ;b 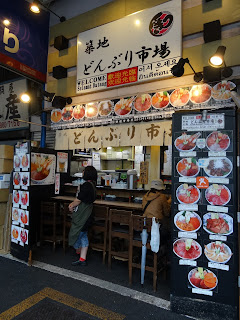 A sushi-ya that welcomes customers in many languages,
including ones I really didn't expect to see at Tsukiji! :O


In my previous blog post, I wrote about going to Tsukiji Market to say goodbye to it before it relocates in November to Toyusu.  Actually, though, only a part of the market will be moving out of its current premises.  More specifically, whereas the famed Inner Market (where the tuna auctions and wholesale seafood trading takes place, and popular restaurants Sushi Dai and Sushi Daiwa can be found) will be in new premises, Tsukiji's Outer Market actually isn't going anywhere anytime soon!


I didn't realize the existence of Tsukiji's Jogai Shijo (Outer Market) until my third visit to Tsukiji, in 2012, and I get the feeling that there remain many visitors to this famous foodie attraction who think that its Jonai Shijo (Inner Market) makes up the whole of Tsukiji Market.  The latter fact is pretty ironic since even both sections of Tsukiji do cater to food professionals, the Outer Market is actually far more (casual) visitor-friendly than the Inner Market.


Among other things, there's a designated visitor information center at the Outer Market and fewer motorised delivery carts zipping around the place.  Also, venders at the Jogai Shijo generally appear to be more active in trying to get customers to patronize their place -- whereas I imagine that at the Jonai Shijo, the vendors deal far more with regulars who also will make far larger purchases at any one time than casual visitors to the place.


Doubtless, there are some folks who will think the Outer Market feels too touristy and may be put off by the constant shouts from people to check out their wares or choose their particular restaurant to eat at.  Still, the sellers' enthusiastic efforts to get your attention is a far cry from overly-pushy, even aggressive efforts, to get you to buy stuff that one is liable to encounter in many other parts of Asia and some -- if not all -- African countries.


Furthermore, the visual displays at the Jogai Shijo really can be something -- and unlike in a number of other places, photography does not appear to be frowned on at all!  On at least one visit to the Outer Market, I also saw a tuna slicing demonstration that involved in an intimidatingly large knife as well as fish taking place outside a sushi restaurant.  This time around, I "only" saw "artistically" arranged tuna heads and tails outside another sushi-ya as well as other eye-catching displays!

One other thing that prompted me to stop in my  tracks was a sushi restaurant sign that bade visitors welcome not only in English but also traditional Chinese, simplified Chinese, Korean, Bahasa Malaysia and what I think is Hindi.  If nothing else, this is a good indication of how international the visitors to Tsukiji are these days, and also how the love of sushi has spread far beyond Japan. :)
Posted by YTSL at 6:19 PM