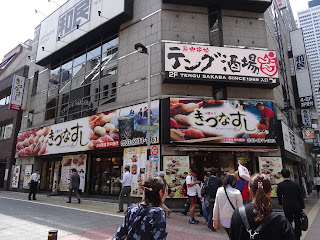 Would you go to a 24 hour sushi place? 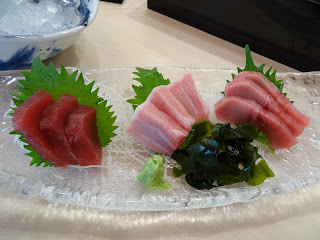 The wonderful tuna sashimi platter I had there :) 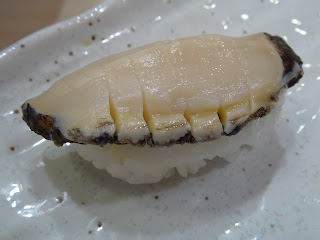 Feast your eyes on this succulent slice of abalone sushi! :b
It's a measure of how much more there is to Japanese food (particularly in Japan, where regional foods abound) that although I love sushi (and sashimi) very, very much, it wasn't until the fourth evening of my recent Japan trip that I ate a meal that consisted entirely of sushi, and only after I got into Tokyo that I dined in specialist sushi-ya.  And it's probably a measure of how much good -- sometimes even great -- sushi and sashimi I regularly get to eat in Hong Kong (as well as on my visits to the Land of the Rising Sun) that only one of the three sushi (and sashimi) meals that I ate in Japan this time around truly satisfied.
Looking back, I should have ordered tempura rather than sushi at the restaurant I had dinner in on the one evening that I spent in the mountain castle town of Matsumoto since the former -- rather than the latter -- was its house speciality.  On the other hand,  I should have been able to expect quality sushi at Ichiba Sushi; not least because it's located within Tsukiji's Jonai Shijo (Inner Market) and is one of the Tsukiji sushi-ya recommended on Yukari Sakamoto's Food Sake Tokyo blog.  But that Tsukiji sushi-ya -- particularly, I reckon, the sub-par uni it served me -- not only disappointed taste-wise but actually gave me an upset stomach that required me to run over to use a toilet less than half an hour after finishing my meal!
Thankfully though, my third and final sushi meal of the trip -- and, in fact, my final meal in Japan before I returned to Hong Kong -- was the kind that made me very happy psychologically as well as satisfied physically.  And the amazing thing was that it was at a 24-hour restaurant just a few minutes walk away from the Shinjuku hotel that I stayed in this time around!
The first few times I walked by Kizuna Sushi, I had my doubts about the place.  As snobby as it sounds, it actually looked too bright and tourist-friendly to seem like it could serve quality sushi and sashimi to me!  But every time I looked through its windows, be it morning, afternoon, evening or late at night, I would see that the restaurant had customers -- and from the looks of it, many of the customers looked Japanese rather than obviously foreign.  And after I decided that I did in fact want to have sushi once again for the final meal of my trip and wanted to pick what I was going to eat rather than opt for omakase (as would invariably be the case at a high end sushi-ya), I decided to give this 24-hour eatery a try.
Despite Kizuna Sushi offering bargain lunch sets, I decided to splurge by ordering a la carte -- and also treating myself to some junmai daiginjo to go with the food.  First, I started with sashimi: specifically, a platter of three different grades of tuna (maguro): akami (the reddest looking meat in the photo at the top of this blog), chu-toro (the medium looking meat in the same photo) and o-toro (the meat in the photo that looks light pink with white stripes).  Next up was a few slices of sushi, including one each of awabi (abalone) -- something that's not often seen on Hong Kong sushi restaurant menus -- as well as uni (sea urchin) and ikura (salmon roe), two of my very favorite varieties of sushi.
Finally, I had a cooked dish of tsubugai (whelk), which I also do love as sashimi but thought it'd be interesting prepared in a way that I hadn't previously tried before.  If I had had more room in my stomach, I'd have gone for sazae (horned turban), a shellfish I like served raw but like even more when cooked (particularly tsuboyaki, in its shell).  Sadly, however, I decided that I'd have to save ordering that for another time when I was in a place with that on the menu.
While this final meal before I headed to Narita airport to catch my flight back to Hong Kong was definitely of the splurge variety, its price was easily about a third of what I'd have paid if I had had the same meal in a sushi restaurant in Hong Kong that was good -- and specialist -- enough to offer those items.  And, actually, I reckon that's true in general of the meals I have (had) in Japan: i.e., even in Tokyo (which one can expect to be more expensive than the rest of the country), they are always a good deal cheaper than what I'd be paying in Hong Kong for food that's the equivalent both in terms of quality as well as quantity!
Posted by YTSL at 11:23 PM