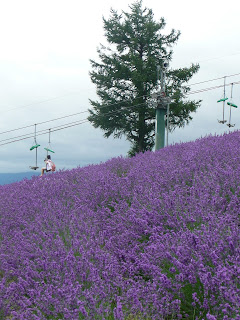 Talk about picturesque, eh? :b 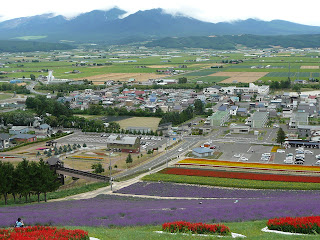 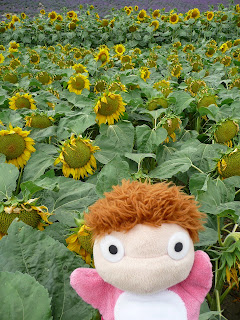 Puppet Ponyo wants people to admire the
sunflowers that also were growing in that park!

In researching where to go in the Furano area to see -- and walk amidst -- beautiful fields of lavender and other flowers, the name of Farm Tomita kept on cropping up -- so I easily decided that it was the place I had to go to.  At the same time though, I felt like I should look at other nearby places to check out -- and upon learning about a lavender park that one would pass by when walking from the train station at Nakafurano to Farm Tomita, figured that it'd make for a nice first attraction to visit on our day trip from Sapporo.

As luck would have it, at Nakafurano train station, visitors were handed discount coupons -- which I thought were for park admission fees until my mother and I got to the Nakafurano Lavender Park and found that it was a ski lift ride that would take one up and down the hill that doubles as a ski slope in the snowy winter!

Imagine this scene if you can: you get on the ski lift and as you individually glide up the hill, piped music fills the air, there's a riot of colors courtesy of lines of beautiful flowers below -- and then, when you get to the section closest to the lavender, this lovely smell wafts up to greet you. It may sound like a dream or fantasy -- but if you go to the Nakafurano Lavender Park, that scene actually becomes reality!  How wonderful is that?!

And for those who wonder if it's as beautiful in reality as in the photographs: I can only say yes, it truly is. Also, that I feel really fortunate that I happened to visit that part of Hokkaido at the optimal time of the year for viewing the lavender and many of the other flowers that grow there.

Next up: The photo-essay I promised in the previous blog entry -- honest!  But aren't you glad I also put up this blog post with some beautiful photos in their own right to further whet your appetite? ;b
Posted by YTSL at 8:40 PM

So much so that, as I'm sure you can understand, I took A LOT of photos that day... ;b

Looks lovely although I do feel just a bit sad for puppet Ponyo who, one assumes, couldn't smell the lavender since he doesn't have a nose. ;=)

Firstly, remember, Puppet Ponyo -- and all the other Ponyos, for that matter -- is female.

Secondly, I'm pretty certain Puppet Ponyo has a nose because when viewed in side profile, her face is definitely contoured in such a way as to make one think she has a nose.

But of course you are forgiven for not realizing that since it's true enough that her big eyes are her dominant facial feature... ;D