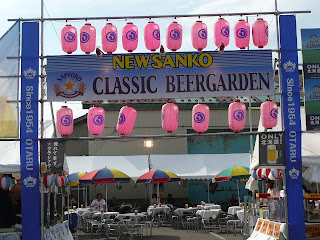 Beer gardens are a common sight in Japan in the summer :) 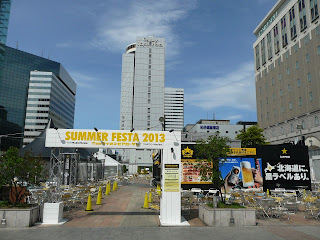 And in Hokkaido, chances are high that they'll be serving
Sapporo beer -- be it in Sapporo (like in this photo)
or Otaru (like in the photo at the top of this blog entry)! 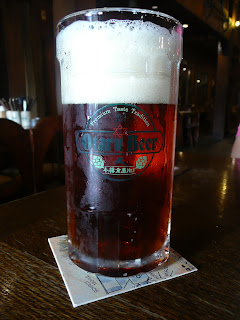 This being said, I did have some Otaru Beer
when I visited Otaru 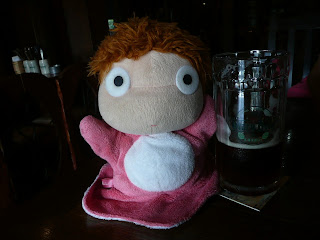 As for Puppet Ponyo -- in the words of my mother,
"Puppet Ponyo's turning into an alcoholic!" :O

There's a reason why the alcohol known to the world as sake is known in Japan as Nihonshu (i.e., Japanese alcohol).  But there's also a reason why nama biru (trans., draft beer) is one of the Japanese terms that I know and frequently use when I'm in Japan.
Put another way: Sake (or nihonshu) has been made in Japan for thousands of years, and is an alcohol drink that has long and strong cultural connections with the Land of the Rising Sun.  At the same time, the Japanese do drink a diverse amount of alcoholic beverages and there's no denying that the Japanese love (their) beer!

As evidence for the latter, let me state that I saw far more Japanese people drinking beer on my recent trip to Hokkaido than sake (or  chuhai, etc.).  Also, even while I did specifically seek out the beer gardens in Odori Park, I also did come across other beer gardens in places where, I swear, I wasn't specifically looking for them -- including at the Otaru pier where I had been looking to book a coastal cruise, and also outside Sapporo (train) Station!
And although I had read about there being a (micro) brewery in Otaru, I didn't expect to spot it while cruising along the port-city's scenic canal.  But what with it being a hot afternoon and all, after we got off the canal boat, I immediately steered my mother (and Puppet Ponyo) towards that purveyor of beer -- and proceeded to have a large mug of its dunkel.

Sipping that German-style beer in environs that were reminded me of the bierhauses I spent time in in Germany was a pleasant and relaxing way to while away an hour or so in Otaru.  Still, I have to be honest and say that the lagers brewed by the big Japanese breweries really do hit the spot more on hot summer days in Japan -- and I really was fine with most of the nama biru I imbibed while in Japan being brewed by Sapporo and, also, Asahi, Kirin and Suntory!
Posted by YTSL at 9:40 PM

The photo of the beer is good enough for a magazine ad. On this hot summer's day, it is tempting enough to make me feel slightly inebriated just looking at it. Ponyo too must be enjoying the brew and might be fancying itself a wandering spirit in the Shinto world.

Thanks for your comments and compliment! Puppet Ponyo, being on the young side, is only allowed to look, not drink herself. All the same, she seemed happy enough posing next to the beer, I reckon... ;)