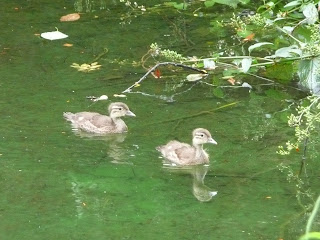 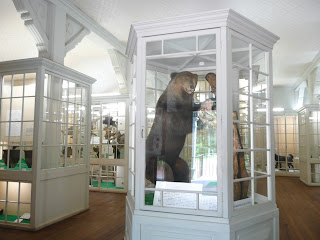 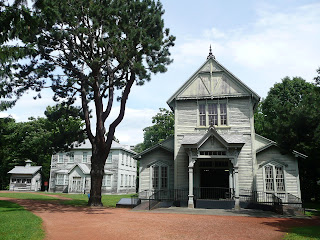 Buildings including that which houses the Natural History
Museum (on the right) and an outhouse that's
considered a historical monument (over on the far left!)


Make of this what you will: each time that I visit Japan, I eat a lot -- and drink quite a bit.  And I figure this is to be expected since I love Japanese food even more than I love Malaysian, particularly Penang, food!


To balance things out (since I don't want to return from my vacations weighing quite a bit more than prior to going on holiday), I try to do a good amount of walking about on my Japan trips.  So I do such as make sure to fit in visits to parks and gardens where I can stroll about to my heart's content -- and outdoor museums too


Thus it was that in between visiting the Hokkaido Former Government Building and  partaking of the crab feast at Hyousetsu-no-mon, I went for a stroll in the leafy environs of the Hokkaido University Botanic Gardens located just a few minutes' walk away from Sapporo Station (and the hotel that I stayed at).

If truth be told, I've been to better gardens in Japan -- and better botanical gardens elsewhere in the world (including those at Kew and Edinburgh).  Nonetheless, I can see why some people consider it to be a pleasant urban oasis -- and for my part, I found its Natural History Museum intriguing like Oxford's Pitt-Rivers Museum in terms of being a historical artifact showing what museums used to be like, and its Ainu Museum to be quite telling in terms of there being so little in it, and so much of what's there helping to emphasize that the Ainu really were pretty different from other Japanese people(s).

On the subject of diversity among the Japanese: I know of at least one Honshu native who doesn't consider people who live in Hokkaido and Kyushu, never mind the residents of Okinawa, to be really Japanese. For my part, even while noticing some regional differences, what seems a bigger divide to me is that between those Japanese men who -- like many other East Asians -- aren't all that hairy, and those others who have incredibly hairy legs and some hair on their chest too!  (And for the record, one can't help but notice this in the summer when people are more likely to wear shorts and open-necked shirts! ;D)
Posted by YTSL at 11:21 PM