Etiquette and behavior in Japanese trains, buses and elsewhere 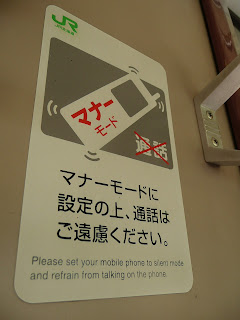 Unlike in Hong Kong, talking on the phone
is frowned upon in Japan 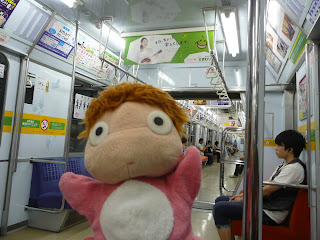 Puppet Ponyo is super happy that she's not
banned from traveling in Japanese trains! ;D 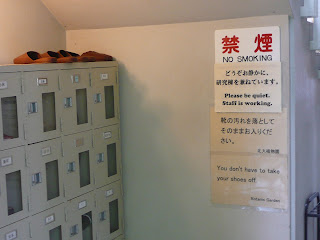 For my 19th and final blog post about my recent Hokkaido holiday series (that began back on July 28), I want to reiterate what a great time I had in Japan once again -- and also discuss certain aspects of the country and its people that I find interesting and also charming.


One of this is how public transportation etiquette in Japan can seem like the mirror image of that in Hong Kong. For example, whereas in Hong Kong, people are allowed to talk on the phone -- and just plain loudly -- but not eat or drink on trains, buses and such like, people are allowed to eat and drink but not talk on the phone -- though texting or silently surfing is considered okay -- on the equivalent Japanese modes of public transportation!


If truth be told, I really like that people on trains, buses and trams in Japan are on the quiet side -- and I have to say that it made for quite the culture shock to return to Hong Kong and be faced with what can seem like a veritable wall of sound on public transportation, particularly the MTR.  Also, while I can see how people in certain parts of the world would leave quite a bit of trash or spill drinks and such if allowed to eat and drink on public transportation, the Japanese also show that one can eat and drink carefully on moving vehicles in such a way as to not cause any mess.

Something else I like about traveling on public transportation in Japan is how many people are not glued to their mobile phones and, instead, are happy to do thing such as read actual hard copy books.  In addition, I have to admit to being amused to seeing how in Japan -- as in Hong Kong -- people feel so safe from crime and such that they can fall sound asleep in trains and other very public spaces!


In general, I love Japan for being a culture and society where courtesy truly is a way of life.  To be sure, there are times when one does worry while in that country that one is breaking some etiquette rule without realizing it -- because there really do appear to be so many rules, and ones that don't apply in many other parts of the world too.


But, honestly, I much prefer traveling in a country where I fear that I'm accidentally being rude much more than that the residents will be rude to me, and even be likely to cause me harm!  In addition, Japan being the super courteous society that it is, there also are signs thoughtfully posted telling visitors that it's okay not to do something as well as what they should be doing!

In the case of the "You don't have to take your shoes off (here)" sign I spotted at the Hokkaido University Botanic Garden's Ainu Museum, it's because there are some shoe lockers and indoor slippers near its entrance that -- after a while -- one will realize is actually there for its staff, as opposed to visitors.  And while you might think it ridiculous that anyone would think that one would have to remove their shoes to enter a museum, bear in mind that Japan is after all the part of the world where people are regularly required to remove their shoes and wear provided slippers when visiting such as historic buildings including castles, palaces and temples -- and certain restaurant's restrooms too! ;b
Posted by YTSL at 10:22 PM

In the photo of Puppet Ponyo she looks like she's at the very height of her vacation bliss -- so carefree and probably without a thought of ever having to return home. Well, Ponyo, all good things must come to an end.

After being featured so prominently in the foreground of your Hokkaido photos, I can't help but feel that Ms Ponyo might desire to be more than just a presence in vacation photos -- specifically, to be in more local Hong Kong photos, so that this vivacious puppet can continue to spread her youthful joy for living to others.

Puppet Ponyo wants me to tell you: she loves going away on vacation but she's also happy to be back at home in Hong Kong, where she regularly hangs out with her sisters (Stress and Muse Ponyos).

But in case you missed them, she *has* featured in photos taken in Hong Kong too...

Seeing Puppet Ponyo's picture makes me sad... because Mr Miyazaki's retirement has just officially been announced by Ghibli's President. So it may be true this time, unless he changes his mind! : (

Sad news indeed but one can hope... after all, Miyazaki was said to be retiring after he made "Princess Mononoke", "Spirited Away", etc. So have been taking each new film he makes as a bonus.

Also, the latest announcement -- re his retiring from making feature films. So... not short films, etc.?