In praise of liver (yes, really, as something to eat)! 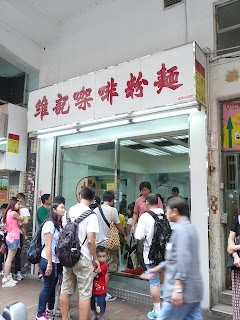 What are people waiting for outside Wai Kee
Noodle Cafe's three branches, including this one? 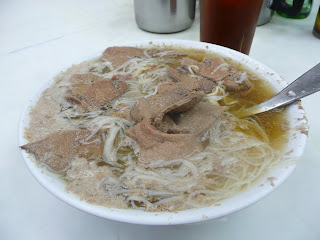 Why, to feast on, among other things, its
pig liver noodle soup of course! :b


However, I didn't really appreciate the taste of liver until my Tanzanian sojourn when I was close to my 30th year.  In that East African country, meat is status food -- more expensive than vegetables, fruits and carbohydrate-rich wheat, corn, rice or sorghum.  And liver is more expensive -- and thus more prestigious -- than regular meat (and exceeded only by nundu, the fatty hump of the cow -- but that's a story for another day).

Being an honored guest at many local tables, I often was presented with (cow's) liver to eat.  Fried and covered in an oily black sauce, it definitely was an acquired taste -- but acquire I eventually did after close to two years of Tanzanian living, and so much so that I found myself pining for liver cooked Tanzanian style after I moved back to the USA!


I've never come across liver cooked the Tanzanian way in the US or Asia.  But I've come close in Malaysia, and, in Hong Kong, I've found other liver preparations that are very much to my liking.  One of these is preserved (pig) liver sausage -- which has a far richer flavor than regular and sweeter Chinese sausage (lap cheong).  The other, I recently discovered, is that which is found at the Wai Kee Noodle Cafe in Sham Shui Po that's also famed for its Hong Kong-style French toast.

It may not look like much, and even look too down and dirty for many people -- but trust me when I say that it tastes so good that it's worth trekking all the way to Sham Shui Po for.  And while I opted for a classic unadorned pig liver rice noodle soup combination for my first taste, my plan next time is to order a fried egg to go atop the whole affair -- and also maybe either opt for macaroni or instant noodles instead of thin rice noodles!

Something that few accounts of this particular dish have mentioned is that there's ginger in the soup -- and I think that's what helps to 'cut' the strong taste of the many slices of pig's liver that one gets in the dish.  And for those who're wondering, that large bowl of pig's liver noodle soup and an iced lemon tea drink that I had at lunch costs just HK$41 (~US$5.29) in total.  Not bad at all for a classic Hong Kong dish from a popular traditional eatery, right? :b
Posted by YTSL at 9:55 PM

Liver and bacon - lamb's liver of course - made me the man I am today. As something of a connoisseur French toast, I will be trying it out one lunchtime for sure. Whether it will beat the stuff served in the cha chaan teng next to the Jockey Club in Shatin Wai is another matter, of course.

Re French toast: so I take it you're a fan of the Hong Kong style version as well as/instead of the Western version? ;b

How can I go back to any other vision when I've sampled for so long the delights of watered-down syrup and eggy bread fried in 10-day-old oil?

Hmmm... when you put it like that... but I think what's great about the Hong Kong style French toast is the mystery filling(s) that one frequently gets in them... ;b