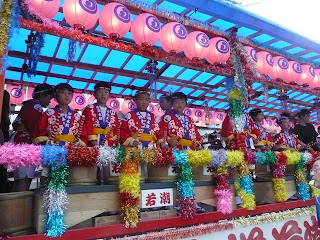 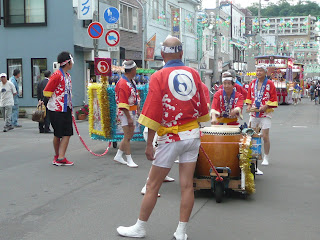 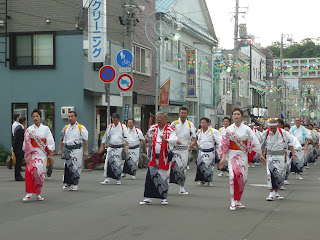 Next up were traditionally garbed --
and often very game -- lines of dancers! :)

"There are countless local festivals (matsuri) in Japan," begins a piece on a website that I consider a very informative Japan travel resource. And although various sources have it that there are festivals throughout the year in the country, there's also a case to be made for (late) summer being when the Japanese are particularly festive.

In any event, it's true that summer's been when I've come across more than one festival taking place in Japan -- and without planning to do so!  For example, back in 2006, on a visit to Kokura, I found the streets of the city to be alive with the sound of drumming one evening on account of a drumming matsuri being in session. And on my most recent Japan trip, I serendipitously visited Otaru on what turned out to be the first of the three-day Otaru Ushio Festival -- and only discovered this when we came across festive arts performances and rows of yatai near a pier.
Early in the evening, as my mother and I were strolling about the port city, we heard the sound of drumming and merry-making coming from near the end of a narrow street.  Our curiosity piqued, we went to investigate -- and came across the start of a procession that later would wend its way via a main street to the very pier area where we had checked out the yatai earlier in the day.

More cute than spectacular, the procession's front consisted of truck loads of young drummers -- all male in at least one instance, and all female in another.  Next up were more drummers -- this time a group consisting of adult females and men, with most of the latter appearing to be at least 10 or 20 years the former's senior! Irrespective of their age though, all seemed admirably intent on making loud noises on their instruments -- and looked to be having fun doing so.

Bringing up the rear of the procession were lines of dancers -- and as I watched them performing their ritualized moves (some of which did look like they were peddling in boats), I wondered for how long -- both distance and time wise -- they'd have to go about doing what they were doing.  But again, irrespective of age and gender, they seemed very game -- all of which made the sight so much more endearing, especially since many of the men had enough about them to make it easy to imagine that they're salarymen in regular life, and many of the women matronly housewives and such! :b
Posted by YTSL at 8:10 PM

That looks and sounds charming! What fun to have stumbled across it.

It really was fun! I love seeing people help preserve/conserve tradition even while enjoying themselves doing so! :b