Not your usual Hello Kitty images and associations on the streets of Hong Kong! 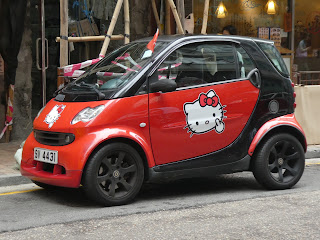 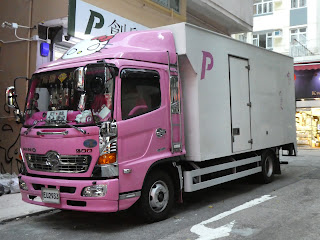 Pink and kawaii but also macho?! ;b
While walking around town this afternoon, I came a Smart Car emblazoned with images that made me do a double take and inadvertently giggle.  It wasn't just that Hello Kitty's visage appeared on the front and sides of the vehicle but, rather, that the kawaii cat character looked to have channelled some of Sanrio stablemate Aggretsuko's aggressive inclinations.
Let's put it this way: while I've long made jokes about Hello Kitty often being seen looking like it's offering up "the finger", these images showed Kitty Chan doing that in a more emphatic manner than I had previously seen!
I guess it stands to reason that Hello Kitty would be found doing this in Hong Kong.  After all, she's already been spotted having a part in protest marches (notably on the day that 689 was sworn in as Chief Executive close fo five years ago now) and at Umbrella Movement/Occupy sites.
Then there's the inclination of more than one fan of the furry feline here in the territory which shares the same initials as Hello Kitty to wear their adoration not only on their sleeve (and front of T-shirts, all over socks and such) but also by Hello Kitty-fing their motorcycles, cars and trucks!
And lest it be thought otherwise: I've seen the riders and drivers of these vehicles be of the male persuasion, as opposed to the females many people would automatically assume them to be; with the driver of a super Hello Kitty-fied truck regularly spotted in the Wan Chai area for some years being a particularly strapping fellow who I'm sure many people would be afraid to cross paths with... or be seen smirking at him and/or his vehicle as he drove by past them! ;b
Posted by YTSL at 11:03 PM

Love the pink...Coffee is on

I actually prefer the red... and am glad that not all Hello Kitty items are pink, at least in Asia! ;b

If the strapping truck driver is as large and muscular looking as his truck I would think the only appropriate comment would be along the lines of "Love the paint job--Kitty Chan looks great". :-).

You may well be right... and more than by the way, glad to have you visiting, and commenting on, this blog once more! :)