My unequivocal reaction to the too ambiguous Personal Shopper (film review) 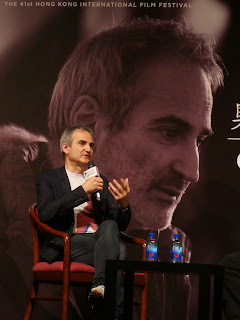 
Less than 24 hours after I viewed multiple Berlinale award-winner On Body and Soul at the Hong Kong Cultural Centre, I was back at the same venue for the Hong Kong International Film Festival screening of the offering that -- rather inexplicably to my mind -- won its helmer the Best Director prize at Cannes last year.  Charmingly, among my fellow audience members was ldikó Enyedi.  And given how wonderfully thoughtful and articulate she came across at her film's post-screening Q&A, I must say that I would have given quite a bit to hear her thoughts on Olivier Assayas' moody offering: which, like hers, mixes together reality and imagination but, to my mind, less successfully.


At one level, the protagonist of Personal Shopper is indeed a personal shopper, whose job is to pick and pick up high end fashion clothing and accessories from stores like Chanel and Gucci for her jetsetting hardly-ever-home fashionista boss Kyra (Nora von Waldstätten).  An American in Paris, Maureen (Kristen Stewart) also fancies herself to be a medium, like her twin brother Lewis, who recently died from a congenital heart condition that his twin sister also possesses.


Rather than begin by showing Maureen going about her work, the film actually opens with the titular character being dropped off by Lara (Sigrid Bouaziz) at the now empty house which the latter and Lewis had called home prior to this death.  There, she awaits a visitation from Lewis, as per a pact agreed-upon by the siblings some time back that whoever died first would attempt to communicate with the other from beyond the grave.


While Maureen does have a paranormal encounter that night, she is unable to tell whether she had been contacted by her late twin or some other supernatural being.  And later on in Personal Shopper, when she receives messages over the phone from an unknown source, she again is unsure whether the sender is Lewis or somebody else, and also whether that somebody else is dead or alive!


This uncertainty on Maureen's part also seems to be echoed on the part of the film's director-scriptwriter: in that Olivier Assayas seems of two -- maybe more -- minds as to whether he wants Personal Shopper to primarily be a critique of our overly-materialistic, soul-threatening contemporary society, a psychological thriller centered on a young woman depressed by the loss of a loved one and drifting unhappily through life, a crime drama involving a rejected lover out for blood or a supernatural horror with some pretty scary spirits moving about -- and maybe even stalking particular humans even as they move about from one country to another.


Much clearer, however, is that Olivier Assayas considers Kristen Stewart to be his current muse, and that -- as he divulged in the post-screening Q&A I attended -- he allowed her considerable leeway to improvize when making this ambiguous-feeling movie.  For better or worse, one result of this close collaboration between filmmaker and lead actress appears to be her ending up having a lot more screen time -- and the vast majority of it alone -- than the star of a more conventional cinematic creation would have.


Definitely less of a good thing as far as this (re)viewer is concerned is that Personal Shopper can sometimes feel like a case of "too many cooks spoiling the broth" or the designated helmer ultimately not wanting to take full control.  The generous might conclude that this film is consciously, even admirably, equivocal.  Those less inclined to be so -- frustrated, among other things, by the ending of the film being way too inconclusive -- will tend towards the opinion that by trying to be different things to different people, this work ended up dissatisfying quite a few of us.