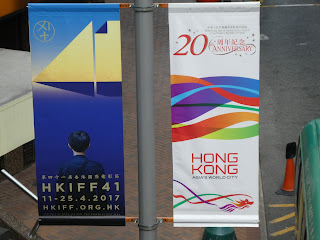 Yes, the Hong Kong International Film Festival has been
in existence for more than twice as long as Hong Kong
has been a Special Administrative Region of China ;b
Ma' Rosa (The Philippines, 2016)
- Screening as part of the HKIFF's Auteurs program
- Brillante Mendoza, dir.
- Starring: Jacyln Jose, Julio Diaz, Baron Geisler, Kristofer King, Jomari Angeles
In the same venue (The Sky, over in Tai Kok Tsui) and around the same time as I viewed Hissein Habré, A Chadian Tragedy the day before, I saw critically acclaimed Filipino filmmaker Brilliante Mendoza's latest dramatic offering.  This time around, the cinema was packed -- and, forewarned by a friend about the shaky movements of  cinematographer Odyssey Flores' handheld camera, I knew to sit further back from the screen than is usually my wont and consequently felt some pity for those who arrived later and were left with front row seats.
Often showing the characters' point of view rather than a more detached perspective, Ma' Rosa is a cinematic work whose director as well as cinematographer looks to want to get audience members to thinking "There but for the grace of God go I" over the course of the film.  And yes, its titular protagonist (played by Cannes Film Festival Best Actress awardee Jacyln Jose) may be foul mouthed and, together with her drug-taking husband Jose (Julio Diaz), supply drugs to their neighborhood; yet she also happens to be a hard-working mother doing what she needs to do to provide for her family, who include a college student daughter (Andy Eigenmann) and two sons (Jomari Angeles and Felix Roco), and the sense is that the drug dealing is actually only a side-business for a pair of convenience store owners.
Like many a Filipino film I've seen (including previous HKIFF entry On the Job), a grim image is provided of contemporary Filipino society; one where crime and corruption is rife, and it's hard to be as moral as some might expect members of a supposedly heavily Catholic country to be.  It's not just that fellow members of a community are wont to casually curse at, lie to, cheat and betray one another.  Rather, as is shown after Rosa and Jose are arrested by Officer Lopez (Baron Geisler) and his team, those officially charged with defending the law may be the most adept and in the best positions to take advantage of their fellow citizens, and appear to have few qualms for using foul rather than fair means.
Presented with unorthodox options to avoid prison time, Rosa and Jose go ahead and do such as rat on their friendly supplier (Kristofer King) and get their children to raise what appears to be a fortune to bribe the cops with.  Perhaps the most heartbreaking part of this dark, yet not completely uncompassionate, film is to see what they go through to come by what's not more than HK$7,600 (i.e., US$1,012) when calculated using current exchange rates.  At the same time, it's a good (in more ways than one) indication of the strength of the family unit at the heart of this drama; one whose matriarch appears to have raised to be survivors, at the very least.
Brillante Mendoza has stated that Ma' Rosa and her brood are "a common Filipino family".  By this, I take it to mean that they are representative of Filipino society as a whole rather than that they are in its lower echelons.  The impression I also get is that while Ma' Rosa is a fictional work, there's a reason for its proceedings feeling so realistic.  And when these two elements of this expertly-made film are taken together, it makes for a pretty damning indictment of Filipino society -- and, in all probability, a powerfully accurate one too.
My rating for this film: 8.5
Posted by YTSL at 7:08 PM