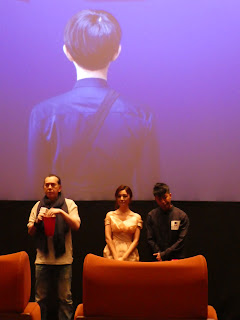 Last night, I attended a Hong Kong International Film Festival screening of a cinematic work (Hungarian Berlinale Best Film winner, On Body and Soul) whose helmer had gone some 18 years without directing a single feature film.  In contrast, Hong Kong filmmaker Herman Yau has three movies getting their first screenings in his home territory in just this month alone; with the most anticipated of the lot, action blockbuster Shock Wave, having opened in cinemas yesterday, and romantic drama 77 Heartbreaks and horror offering The Sleep Curse being accorded Hong Kong International Film Festival screenings before their general releases.

As might be expected when such quantity is generated within such a short time frame, the quality of the work(s) can suffer.  In the case of The Sleep Curse, it certainly doesn't help matters that the story (scripted by Erica Li and Eric Lee) is the sort that appears to have been designed more to help serve up visually shocking imagery and press certain emotional buttons than to actually make logical sense.  I also am moved to wonder whether the decision to have lead actor Anthony Wong Chau Sang and lead actress Michelle Wai play dual roles was less to provide them with twice the chance to impress and more to save on the cost of hiring twice the number of thespians to play those parts!

In the story that takes place in the present day, Anthony Wong portrays Lam Sik Ka, a Hong Kong-based professor of medicine whose research some of his peers and superiors find suspect.  A sleep disorder specialist who believes the day will come when humans won't need to sleep at all, he finds a willing test subject in Monique (Jojo Goh), a Malaysian woman whose family appears to have been cursed to develop insomnia that's so serious that it inevitable leads to insanity and death.

In the film sub-plot that's set during the Japanese occupation of Hong Kong, Anthony Wong portrays a teacher turned collaborator -- who also happens to have been Lam Sik Ka's father.  Enlisted by a Japanese colonel (Funaki Ikki) to help do such as extort money from his fellow Hong Kongers and assist another, less scrupulous collaborator (Gordon Lam Ka Tung) who runs brothels filled with "comfort women", his fate is sealed -- and that of his relatives too -- after twin daughters (both played by Michelle Wai) of a Taoist priest enter his life.

In its depiction of Japanese atrocities and revenge exacted by ethnic Chinese people on their territory's evil occupiers, it can seem like The Sleep Curse has Mainland China more than Hong Kong as its target audience.  However, the supernatural elements in this horror work would appear to preclude it being shown over on the other side of the Shenzhen River while this Category III-rated offering's most gruesome scenes seem like they would appeal most to the type of B-movie aficianados who are particularly prevalent in the West.

As someone who's not a particularly big fan of horror films, The Sleep Curse is the kind of work that wouldn't naturally appeal to me.  But even while I wouldn't consider it to be my particular cup of tea, and also was rather disappointed at how so many of its plot elements didn't make sense, I have to credit the movie's visuals with having been able to infiltrate into my dreams/nightmares later that night.  Put another way: this offering may be on the schlocky and exploitative side, yet it nonetheless was successful in leaving some kind of impact on my imagination, if not psyche!