Critter spottings and photo-taking while out hiking in Hong Kong :) 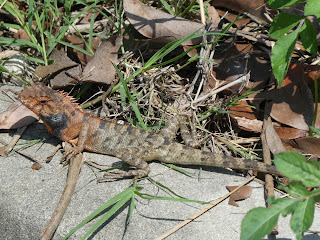 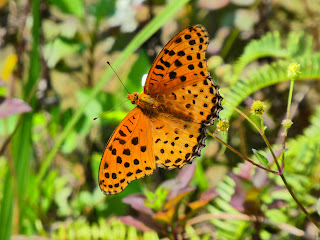 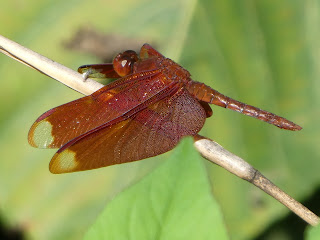 A dragonfly with wings resembling lace ;b
Near the conclusion of yesterday's hike, I wondered aloud if I had passed the century mark in terms of numbers of photos I had taken; so many were the sights that I had felt compelled to capture with my camera over the course of around five hours or so of wandering around in an area of Hong Kong I previously had never set foot in.
Actually, I found upon returning to my apartment and downloading the images onto my computer that I had taken fewer than 100 snaps earlier that day.  Still, there are a good number that I really like and reckon are worth sharing: including of now familiar creatures that I nonetheless can't resist snapping shots of because they're just so photogenic!

Take, as an example, the species of reptile known as changeable lizards.  Possessing the ability to change colors to camouflage itself in a variety of surroundings, they are not the easiest of creatures to spot.  Consequently, I often get a sense of achievement from doing so!  At the same time, I love how they're one of those species of creatures whose defensive tendencies include freezing and hoping that no one has spotted them when they finds themselves in close proximity to other animals since, because this characteristic makes them easier to photograph than those critters that are loathe to stay still seemingly at all times!
Among some of the most frustrating of critters to try to snap photos of are those fluttery-winged creatures known as butterflies.  And while I previously felt inclined to take shots of even rather common and/or less colorful species of butterflies, I've become increasingly more selective with regards to which butterflies will literally stop me in my tracks and get me fishing out my camera.  For the most part, they now have to be members of those species that I've not yet got a good photo of.  At the same time though, it's true enough that certain members of this insect class are just too beautiful and consequently end up tempting me to try to take photos of them again and again and again!
Still, if I were to pick the insect I love photographing best, it may well be dragonflies rather than butterflies, though their damselfly cousins would come a close second.  Maybe it's because a dragonfly was among one of the first critters I managed to get a clear shot of while out hiking in Hong Kong.  And I know some who will suggest that it's because they have such a photogenic pose when doing what comes naturally!  But, in all honesty, I'm often primarily in awe of how delicate as well as beautiful their wings are.  Oh, and it helps that they are more likely to pose for seconds at a time on such as twigs and even blades of grass, and that I find their photobombing tendencies amusing rather than irritating... ;b
Posted by YTSL at 11:59 PM