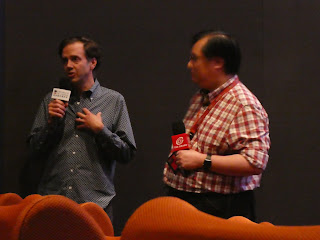 After many years of resisting the impulse to do so, I finally joined the Facebook community a few weeks ago.  In so doing, I've been witness to how people can seem willing to reveal so much about themselves via the posts they put up, share and like on that social media platform; many of which tend to be on the light-hearted side but some of which are also are seriously political in nature.

How many Facebook users, I wonder, really do realize and care that they are leaving a super detail-filled information trail out on the internet for such as various government agencies to see?  And can they envision that even seemingly innocous comments could land one in big trouble and result in one getting tortured and forced to flee one's homeland?

To be sure, the Facebook user in question who recounted his having undergone precisely that experience in the disturbingly thought-provoking Black Code is Syrian (rather than, say, American, Japanese or living in some other country whose citizenry tend to trust their government).  And it's also true that the vast majority of cases that Canadian filmmaker Nicholas de Pencier has chosen to focus on in his work are Third World ones.

But, as the cinematographer turned documentary director sought to make clear in a Q&A session after the Hong Kong International Film Festival screening of his film that I attended: he's by no means intending to say that the Chinese, Ethiopian, Pakistani, Syrian, Brazilian and other national governments shown monitoring the moves of their citizens in his documentary are the only ones out there engaging in internet surveillance along with censorship and cyber espionage.  (Also, he pointed out, it's not like he's unaware of companies also engaging in activities that threaten free speech and privacy on the internet; instead, it's just that the subject is so vast that it's worthy of a whole different film.)

Inspired by Black Code: Inside the Battle for Cyberspace, a book by University of Toronto political science professor Ron Diebert, whose Citizen Lab has been examining government actions designed to disrupt and/or control the internet for more than a decade, Nicholas de Pencier travelled the world to chronicle diverse examples of state surveillance, political activism and citizen journalism to show how governments seek to crush political dissent but individual citizens also are seeking to fight back.

Certain segments of his powerful documentary are disturbing and horrifying, with real deaths being shown on film and also being shown having been preceded by violent threats and other inflammatory comments against the eventual deceased posted online.  And there are points when watching Black Code that one might feel tempted to just give up on the whole internet thang and get out of cyberspace.

Probably realizing how his often alarming work would make many thinking people feel, Nicholas de Pencier consequently also goes out of his way to not only emphasize how brave many of the people (political activists, content providers, journalists, etc.) who feature in his documentary are but, also, that there are indeed netizens out there who have managed to strike blows for free speech, freedom, justice and a whole plethora of human rights.

Something else that Black Code makes clear is that there really are some benefits to our world being increasingly interconnected, by the internet and otherwise.  For example, Brazilian citizen journalists can better do their job using an app that previously was only popular in Japan.  And here in Hong Kong, people watching a documentary by a Canadian filmmaker can see parallels, say, not only between what the Mainland Chinese government is trying to do in Tibet and Hong Kong but also people protesting political injustice and economic inequality in Brazil and participants in -- and those who continue to be sympathetic to -- the Hong Kong's Umbrella Movement.