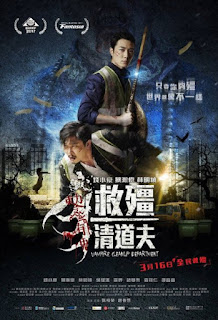 Less likely, surely, will have been those times when a friend and/or film critic's high praise made you reconsider your initial disinclination to check out a movie and you then actually found yourself really bowled over by it upon finally viewing it.  But that is in fact what happened with Vampire Cleanup Department, which I finally only caught on a big screen close to three weeks -- an eternity by Hong Kong cinema standards -- after it had been released in local multiplexes!

A supernatural action-comedy with the kind of special effects that can look cheap and corny at first glance -- but be nostalgia-invoking and seem fun when viewed in the right context), among the most pleasant surprises of this film are how it doesn't just opt for cheap gags and laughs but, instead, actually possesses a well-told story that's full of likeable as well as interesting characters who are pretty uniformly well portrayed by young guns and veteran thespians alike.

The uniquely-named Babyjohn Choi plays Tim, a young adult raised by his eccentric grandmother (Susan Shaw) after being orphaned as a babe.  An unassuming, underconfident fellow who talks to his phone's virtual assistant more than any female in his age group, his life changes dramatically after he comes across -- and is bitten, in the butt by! -- a vampire in a neighborhood alley one evening, and comes to learn that he's immune to vampire venom and gets recruited to join the clandestine Vampire Cleanup Department of which his parents (who he had thought were regular street cleaners) had been invaluable members.

Mentored and trained by the likes of unit members "Uncle" Chung (Richard Ng), "Uncle" Chau (Chin Siu Ho) -- who had been good friends with his father -- and a Taoist priest known as Master Ginger (Yuen Chung Yan), Tim learns how to fight and kill vampires using tried and tested techniques.  But complications ensue -- to say the least! -- after he encounters, then actually falls for, a female vampire (winsomely essayed by Malaysian internet sensation Min Chen in her first film role) who had been buried alive more than a century ago to serve a local dignitary turned super scary vampire in death.

An immensely enjoyable updating of the venerable Hong Kong vampire movie tradition (which includes classics such as Sammo Hung's Encounter of the Spooky Kind (1980) and Ricky Lau's Mr Vampire (1985)) which also very knowingly references Hollywood's Ghostbusters, Vampire Cleanup Department is a thoroughly admirable local effort; and all the more so when it's realized that it's helmed by a pair of debut-making feature film directors.

With efforts like this, Hong Kong cinema offers up hope -- positive proof even -- that, contrary to the notices of its death that have been periodically offered up for more than a decade now, there's still life in it.  Even better, its future may actually be pretty promising, courtesy of the welcome infusion of talented new blood combined with the continued participation of some still very game industry veterans.
My rating for this film: 8.5
Posted by YTSL at 6:06 PM