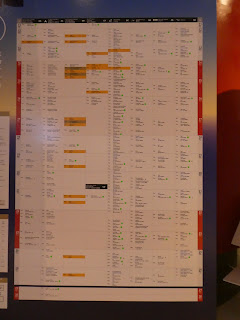 There are hundreds of screenings to choose from
at the  Hong Kong International Film Festival!
Stonehead (Mainland China, 2017)
- Screened in the HKIFF's Young Cinema Competition program
- Zhao Xiang, director and co-scriptwriter (with Liu Dan)
- Starring: Zhu Hongbo, Cai Jiakun
The tragedy of China's "little emperors" -- only children without siblings -- has been pretty well documented internationally.  Less known, and no less of a tragedy, is that many of the "little emperors" are also "left-behind children": young boys usually (more so than girls, as the country's "one child policy" also has spawned a severe gender imbalance) who have been left to be raised by their grandparents in rural areas, sometimes for years at a time, while their parents go off to the cities in search of work.
Such sibling-less and also effectively parent-less children are the focus of Stonehead, a documentary-style drama set for the most part in a small village in Guangxi province that I could well imagine being pretty representative of many around Mainland China.  And Stonehead is also the nickname of the film's 10-year-old protagonist, who shares the same name (Zhu Hongbo) as the young actor who plays him but is referred by pretty much everyone, bar for his class teacher, by his strange nickname.
On what was one of the happiest and proudest days of his prepubescent life, the class' top student was given a certificate of merit and also a football from the area's education director.  Prizing the football as much, if not more, than the merit certificate, Stonehead yearned to show his new possession to his father, even determining that it wouldn't get played with until that anticipated event occured (presumably the next time Chinese New Year -- when many of those working in far away cities would make annual trips home -- came around).
But things don't work out as planned, with his class teacher deciding that the football actually was given to the school rather than a single student and the ball being found to have a leak after being kicked just once.  Worse the boy who kicked the ball, Stonehead's best (and maybe even only) friend, known as Pouchy (Cai Jiakun), is deemed by the cabal led by a popular classmate referred to as Monkey (Deng Shou) to have damaged it; and is consequently subjected to bullying as punishment for his "sin".
With few adults around and seemingly none willing to help inculcate morals, ethics and general good behavior in the children, the schoolyard and the village as a whole turns out to be quite the cruel place indeed.  In addition, it's instructive to find that the student decreed by his teacher to be the worst in the class is the top dog among his classmates whereas the one officially deemed a county-level model student is not at all popular among his peers.
As can be seen by such as the existence of newly erected bigger houses strewn about the landscape and material gifts galore brought back on their rare return trips home, those who left the village to make money look to have been fairly successful in doing that.  But the price they and their families, particularly the young generation, pay for their having gone away to take part in the nation's economic development looks to be damagingly high socially and psychologically.
Watching Stonehead, I felt sad and frustrated for the put-upon titular character and also the unfortunate Pouchy.  And because so much of what is depicted in the film comes across as all too real, I also got to feeling pretty pessimistic, fearful even, about the future of China: a country which looks to be getting increasingly economically wealthy but morally bankrupt.
My rating for the film: 7.5
Posted by YTSL at 11:43 PM