Japanese strawberries and French champagne go together a treat! :) 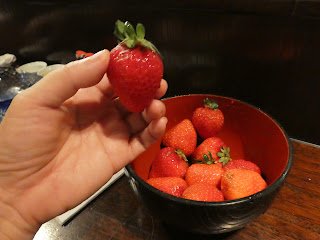 Large strawberries, and delicious too! :b 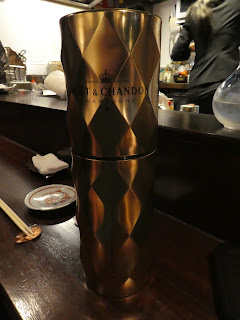 A good drink to go with sweet strawberries :)
Surely this can't be becoming a habit?  Last fall, I succumbed to the siren call of the Japanese golden peach.  And while there was a time when I considered people who purchased and ate expensive Japanese fruit to be excessively indulgent, if not plain out of their minds, I fear that I may have now joined the ranks of those folks who don't consider it a completely crazy thing to do; this particularly so when sharing the bounty with good friends!
While on the subject of good friends: the past two Wednesday evenings has seen my South African drinking buddy generously sharing very nice bottles of premium champagne with me and a few other friends he regularly sees at Sake Bar Ginn!  Last week, it was a bottle of fruity Moet & Chandon Brut Imperial which came in a metallic case of the like I've never seen before.  The previous week, we had vintage Dom Perignon, which tasted very fine indeed!

Knowing in advance on both occasions that we'd be having some champagne (before we moved on to sake), I decided it'd be good opportunities to get some strawberries since they appear to be in season, and are fruit that I've read go well with champagne.  As for the decision to go with Japanese ones: I figure it'd suit the setting since we'd be meeting at a sake bar.  More importantly, I had a strong feeling that Japanese strawberries would taste better than ones from other parts of the world; this based on the significant qualitative difference I'd previously noticed between such as Japanese peaches, melon, tomatoes and grapes from that grown in other parts of the world.

Rather than get them from a Japanese supermarket like Citysuper or Aeon's, however, I went and bought the strawberries from the Yau Ma Tei Wholesale Fruit Market which has vendors that, contrary to its name, sell to individuals rather than just wholesalers.  And when I saw the vast difference between the prices charged for them at such as Aeon and Apita versus at the Yau Ma Tei market, I'm so very glad I did so!
While the price was definitely lower over there, I don't think the quality of the fruits themselves were.  In any case, on both occasions, everyone who got to taste the strawberries I got agreed that they were super delicious.  And it was interesting too to discover how much the strawberries and the champagne complemented each other, and also had an effect on the other's flavor.
With the Dom Perignon, it seemed like the champagne made the strawberries taste sweeter even while the strawberries made the champagne seem finer.  Somewhat unexpectedly, the Moet & Chandon and strawberries pairing actually didn't have the same result.  Instead, it was more a case of that particular champagne's particular flavor becoming accentuated by the strawberries and the fruit's taste seeming to acquire added 'body' when imbibed with champagne!
In any event, almost needless to say, both weeks' pairings were very enjoyable indeed.  And for the record: it really is possible to not get sloshed during an evening spent drinking champagne and sake.  The trick is, I believe, moderation.  And it helps too to have quite a bit to eat, including deliciously juicy fruits that could (almost!) be considered as nice a treat as the very fine alcoholic beverages! ;b
Posted by YTSL at 11:53 PM

Ah, Champagne..... Here's some value for money ones:

We're trying to grow a differnt Strawberries....Coffee is on

I'm a cheapskate. I haven't bought any champagne in years, maybe even ever! And now that I'm been able to directly vintage Dom Perignon to another champagne, I'm afraid that if I *do* actually spring for some champagne, it may have to be the really very good type! ;S

For really very good types of Champagne, in my very much biased opinion the mentioned Fleury Brut Blanc de Noirs N.V. beats some of those doubled its selling price.

Anyway, do not take my word as it is really biased. For alcoholic drinks you really have to taste it before you know if it really clicks. I could only suggest If you have a chance and happen to be around that particular bottle shop, give it a try.

I only only tasted Dom Perignon once around ten years ago for vintage 1990. I have to admit, Maybe it's not matured, or maybe it's the vintage, or even bottle variation. I am not impressed.

These days, I tend to enjoy champagnes from small growers\producers as they are more affordable and may often surprise you.

Anyway, for even better ones, please try to remember the following:

The Laurent-Perrier is an non-vintage cuvee where the other two are vintage champagnes. Try to get older vintages if possible.

Totally agree with this comment of yours: "For alcoholic drinks you really have to taste it before you know if it really clicks." Which is why I plan to still stick to spending money on the alcoholic beverages I know I like -- i.e.., sake, beer, and certain well-made cocktails -- rather than dip into the world of champagne purchases! ;b

Can you share a little about your experience of finding a non-wholesale stall at the YMT Fruit Market? e.g. which stalls and what time of the day?

I've gone in the early and late afternoon and found whole rows of stalls selling fruits (and some vegetables) to non-wholesale customers. I'm not sure when this all started but it really is easy enough to spot the stalls at the market that are open to non-wholesale purchases!

Alright I'll try to imitate your strategy the next time I pass by HK! Wonder if I'll be lucky enough to encounter some Japanese grapes and perhaps peaches.

Come over during the right season and it'll increase your luck at the Yau Ma Tei wholesale fruits market! ;b