Nature's resilience on show at Sha Lo Tung once more 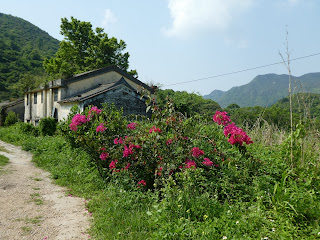 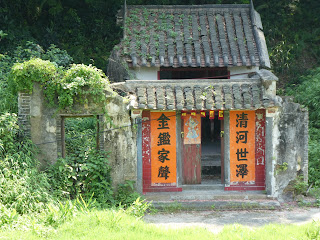 Open door at the village (ancestral) temple
The ecologically rich valley enclave of Sha Lo Tung -- which lies to the north of the biological treasure that is Fung Yuen Butterfly Reserve and almost completely surrounded by land within Pat Sin Leng Country Park -- has been in the news a couple of times since I last visited it.  Then, my sense had been that all was not well in that part of Hong Kong.
And this was even before I read that early last year, green groups accused villagers of having a hidden agenda after they planted rapeseed flowers where fields of wild plants hosting fireflies and dragonflies used to be.  Then in December came accusations by a Sha Lo Tung landowner that the government wouldn't help conserve the village enclave even while also not allowing small-scale development on it by people whose ancestors had lived there.
So imagine my happy surprise and relief to find abundant natural growth where previously the land had been cleared in not the healthiest of ways and a sense of peace where previously I had felt disquiet when a friend and I made our way to Sha Lo Tung from Hok Tau Irrigation Reservoir earlier today.  And adding to my sense that nature looked to once more revived and showed its powers of resistance was the abundance of wild creatures that we spotted along the way, including in the vicinity of the scenic upland valley which, for some reason, continues to lie outside a country park despite its surrounding areas being within one.
On the sort of beautiful blue sky day where my eyes often were drawn upwards to admire the blue of the sky and the puffy white clouds that floated about above me, I also found myself scanning the ground and greenery for interesting critter sightings.  Bugs of the camouflaged variety as well as ones that were tiny but very noticeable on account of being bright red, a skink that moved too quickly for me to photograph (but not so fast to elude a sighting), various butterflies, dragonflies and damselflies: the presence of all of these helped to make today's hike a pleasant one as far as I was concerned.

Still, best of all for me, was the sense of paradise regained at Sha Lo Tung.  True, it may never feel as magical as on my first visit, when I more or less accidentally ended up in the area.  But this part of Hong Kong remains one of those countryside enclaves that one can scarcely believe still exists in "Asia's World City", and whose very (continued) existence the powers that be would do well to ensure.
Posted by YTSL at 10:36 PM