Love Off the Cuff's not for the critical (film review) 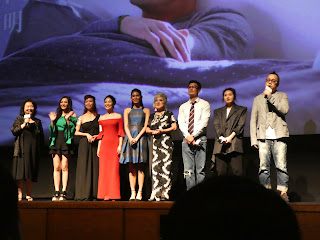 
Out of the 19 Hong Kong International Film Festival (HKIFF) screenings this year that I went to get tickets for half an hour after the tickets went on public sale at 10am on March 17th, I only was unable to secure that for the fest opener.  Undaunted, I decided to try for standby tickets on the day itself and was pretty elated when I did manage to come by a precious ticket for the world premiere of the much anticipated Love Off the Cuff (which opens in local cinemas some two weeks after its HKIFF screenings).
But when I went into the gargantuan auditorium that is the Hong Kong Cultural Centre's Grand Theatre and saw row upon row of empty seats up in its upper tiers, I felt somewhat let down.  And the sense of deflation after having some emotional highs was also the experience I had when viewing the third installment of Pang Ho Cheung's romantic comedy series that began with 2010's Love in a Puff and also includes 2012's Love in the Buff.


Love Off the Cuff got off to a creatively offbeat start involving the recounting of a childhood scary story by Cherie (Miriam Yeung) whose logic Jimmy (Shawn Yue), ever the smartass, found easy to assail.  The duo's discussion was abruptly halted though when she -- who had been using her lover's legs as her pillow -- discovered that her hair had got caught in his jean zipper and it was downright hysterical to see what particular act her frantic attempts to free herself resembled!


Later on in the movie, there's another amusing situation that ensues as a result of fairly innocent actions being plausibly mistakenly assumed to be far less so.  For the most part though, things often are too far fetched for my liking, particularly since I found myself doing what Jimmy had done with the horror tale that had scared Cherie so back when she was a young girl: i.e., too easily find holes to poke in the story to be able to go with the flow and feel affected by it.

It's not just the infusion of some outlandish sci-fi components into the story that didn't work for me.  (Actually, that particular absurdity tickled my funny bone somewhat, as did some of the dirtier jokes in this film whose makers seemed to want to see how low they could go for amusement's sake!)  Rather, the old problem I had with Love in a Puff reared its head again here: namely, that I found it difficult to understand what Cherie saw in Jimmy that would make him her Mr. Right; which is not a trivial matter when pretty much the whole movie is about her wondering whether he is indeed the man that she wants to, and should, spend the rest of her life with.


To be sure, seven years on and two films as a romantic pairing later, Miriam Yeung and Shawn Yue do exhibit an easy and pleasant chemistry.  But, no doubt in part because their characters' romantic scenes are so unsexual, they don't convince as lovers; with it really not helping matters when Miriam Yeung is clearly still wearing a bra even in at least one scene featuring the star-crossed pair in bed and Shawn Yue's underpants are too obviously visible underneath a robe when he's supposed to have discarded them in another scene in which they're supposed to be feeling all hot and randy.


Another example of the filmmaking carelessness and narrative laziness that permeates this movie is the insertion into the picture of a female character who's supposedly Canadian Chinese, like Jimmy, but appears able to only converse in Putonghua (essayed by Mainland Chinese actress Jiang Mengjie), and whose primary reason to be in the picture is to provide Cherie and Jimmy with things to bicker about.  Furthermore, while the colorful characters played by Paul Chun Pui, Susan Shaw, Jo Kuk and company can be fun to watch, their antics feel like mere padding for content that otherwise wouldn't be sufficient for a feature film.

To sum it up: Miriam Yeung and Shawn Yue deserve better, and Pang Ho Cheung can do -- and has done -- so much better as a director and scriptwriter.  We're talking about the talented fellow, after all, who's crafted gems like Women Who Flirt with current regular writing partner Jody Luk and Dream Home with Jimmy Wan and Derek Tsang (who has an on-screen role in this movie as Cherie's brother), and whose solo scripting efforts include Aberdeen (the 2014 Hong Kong International Film Festival's much stronger opening film).