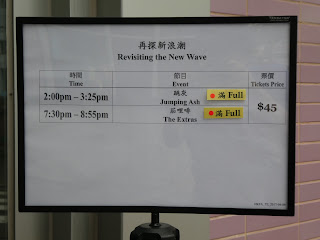 Who says there's no audience for old movies?!


Among the candidates for the title of first Hong Kong New Wave film is a crime movie, co-directed by an Anglo-Chinese man who I first saw on screen playing a Peking opera theater owner in Peking Opera Blues, whose initial scenes take place in the Netherlands.  A commercial hit as well as a pioneering stylistic work that features shot-on-location scenes in atmospheric locales such as the Kowloon Walled City, Jumping Ash thrillingly tells the story of a powerful Hong Kong businessman-criminal who the police want to bring to justice and the family of the Amsterdam-based Triad boss he arranged to be killed want dead.


Rotund and oozing confidence, Tung (Nick Lam) outwardly appears to be a pillar of the establishment but is a major drug dealer who employs a deadly assassin (Michael Chan) to ruthlessly deal with those who stand in his way.  He's also got a number of officials, including those in the upper echelons of government and members of the police force, in his pocket but meets a cop he's unable to bribe in Callan Leong (Ga Lun), a police inspector intent on taking Tung down.


In addition, in his attempt to forcefully gain control of the drug supply out of Amsterdam, Tung makes a formidable enemy in the form of the brother (Chan Sing) of a man he arranged to have spectacularly killed on his own turf.  And things get pretty complicated as well as hot indeed when the vengeful party heads over to Hong Kong to settle matters with Tung.


Its plot may sound nothing of the ordinary but the energy and life invested into the making of the film makes Jumping Ash feel really special.  Also, some of the action scenes (choreographed by Michael Chan and Cheng Kei Yin) are really exciting: not because there are special kung fu moves employed but, instead, because the violent struggles are filmed in such a way that one gets a good sense of the sheer desperation of those (including, in one instance, Josephine Siao Fong Fong's surprisingly feisty character) who have the odds stacks against them.


The fashion of the times can make many of the men in the movie appear laughable, especially those whose trousers have super wide legs.  There's also a scene involving a black man in this 1976 effort that I would like to think would no longer be acceptable in a more contemporary film.  Still, for the most part, Jumping Ash looks to have managed to stand the test of time.  Indeed, not only is it still very watchable and entertaining but Hong Kong movie fans like this one are moved to rue our not seeing more of the kind of raw enthusiasm and sheer daring it has in spades in Hong Kong cinema these days.