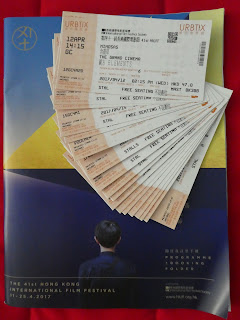 It's that time of the year... ;b
Mimosas (Morocco-Spain-France-Qatar, 2016)
- Screening as part of the HKIFF's Global Visions program
- Oliver Laxe, director and co-scriptwriter (with Santiago Fillol)
- Starring: Ahmed Hammoud, Shakib Ben Omar, Said Aagli
As I watched what its director has described as a "religious western" shot for the most part in Morocco's Atlas Mountains, I got to thinking how alien -- not just foreign -- so much of it looked and felt; with quite a few of the plot developments and story segues in French-born, Morocco-based filmmaker Oliver Laxe's Mimosas being far less predictable than those found in many a Hollywood sci-fi blockbuster.  An experimental work which at times seems ethnographic in character and at others like it's going to be a more rugged version of hiking drama Wild before venturing onto truly unknown territory, it appears to depict stories taking place on different plains (and perhaps even time frames) linked together by the presence in them of a couple of characters.
In a recognizably contemporary setting, a young believer (Shakib Ben Omar plays a character who shares the same first name as him) said to have baraka (be blessed) is given an unusual assignment by a man who regularly hires men to drive taxis on a day to day basis.  In other scenes that look like they may have been set before the onset of the modern era but are timeless enough that they also could conceivably take place in the present day, an elderly sheikh's ragtag caravan attempts to wind its way through and over the forbidding Atlas Mountains to the town where his ancestral resting place lies.

After the sheikh ends up dying in the mountains, two of the party are charged with the task of taking the deceased's body over to Sijilmassa for a proper burial.  At least one of this pair is less than whole-hearted in his embrace of this assignment but after Ahmed (Ahmed Hammoud) and Said (Said Aagli) are joined by a mysterious stranger who describes himself as a shepherd, they find themselves being shepherded along by the fellow (who turns out to be none other than Shakib) into pitting their lives against natural and other obstacles to do what the more religious of the crew consider to be the right thing.
The Screen Daily critic who viewed it at Cannes -- where Oliver Laxe came away with the Critics Week Grand Prize -- opined that Mimosas would prove "mesmerising for some, perplexing for others".  For this (re)viewer, the film actually proved to be a bit of both.  Intriguing and posing a number of questions (including, it would seem, about spirituality), its then declines to provide plausible -- or, at least, easy -- answers in a way that ends up frustrating but also impressing somewhat too!
My rating for this film: 7.0
Hissein Habré, A Chadian Tragedy (Chad-Senegal-France, 2016)
- Screening as part of the HKIFF Reality Bites program
- Mahamat-Saleh Haroun, director and narrator
- With Clément Abaïfouta and other members of the Association of the Victims of the Crimes of the Hissène Habré Regime
Six years ago at the Hong Kong International Film Festival, I saw my first film from Chad.  The Screaming Man was directed by Mahamat-Saleh Haroun.  And the same filmmaker is at the helm -- and serves as narrator -- for a documentary about the thousands of people tortured and killed by a little known African despot’s repressive regime, that has a number of the victims giving moving witness by way of their words but also the condition of their bodies.
Hissein Habré ruled Chad from 1982 to 1990.  Brought into power with the support of the USA and France, he went into exile in Senegal after he was deposed, leaving behind so many ruined lives as well as dead bodies buried in mass graves.  The dead can't speak and some of the survivors can barely do so.  But those who are able to do so in Hissein Habré, A Chadian Tragedy manage to very powerfully convey the trauma they suffered in prisons where terrible evil took place and wherever else Habre's secret police went.
It will be hard to forget some of the stories and details offered up in this documentary.  Also memorable are the people who bore witness on the film: individuals like Clément Abaïfouta, the articulate former prisoner who co-founded the Association of the Victims of the Crimes of the Hissein Habré Regime, and others such as the woman who channeled her anger at having been imprisoned and mistreated into becoming an officer in the rebel army, the once wealthy sugar trader so malnourished in prison that he is now suffering from brain dramage and has difficulties walking, and the man who had terrible things done to him but told of seeing the results of even worse things having been perpetrated to similarly innocent people.
The Hong Kong International Film Festival's program notes include the following: "Habré was finally convicted in Senegal in 2016: this film indicts us for not caring then -- or perhaps now?"  Sadly, in view of there being just 15 people (including myself) in the audience for the (admittedly weekday afternoon) HKIFF screening I attended yesterday of Hissein Habré, A Chadian Tragedy, it does appear to be the case that many folks are guilty as charged.
My rating for this film: 8.0
Posted by YTSL at 2:11 PM