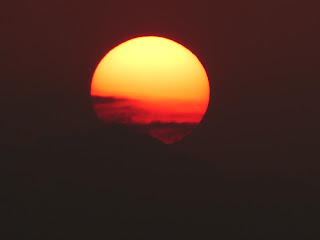 Guess what this is! ;b 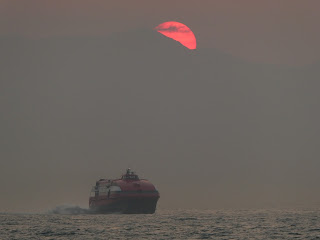 The sun setting over Lantau, as viewed from
the public wharf area at Kennedy Town, that's what! 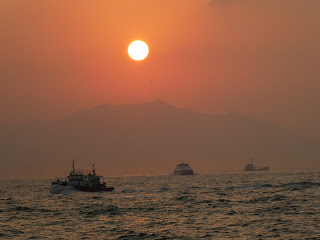 The same scene a few minutes before
the other pictures were taken :)


Many years ago, when I was living in Philadelphia, a housemate and I got to discussing a whole range of subjects late one night.  So earnest, and at times heated, was our conversation that as natural light began shining outside the house, we got to realizing that the sun had risen before we had decided to call it a night!


Among the reasons why that incident has stayed in my memory is that it's a rare occasion when I actually was awake at daybreak.  And even then, I actually didn't see the sunrise since I was indoors and not in a place where the horizon was visible.  Come to think of it, I can't remember a single instance of my having seen the sunrise; that's how little of an early bird I am inclined to be!


In contrast, I have a number of fond memories of witnessing awesome sunsets.  Perhaps the earliest one that I can pretty vividly recall after all these years -- but which I can't share as I only have non-digital photos of, since it occured so long ago -- was viewed from the beach of the resort where my family stayed on a Langkawi vacation trip.  In my mind's eye, it was as stunning as the gorgeous sunsets I got to see while visiting the southwestern Japanese city of Matsue last May, with the sun painting the scene bright orange like I've seen it do at Tai Mei Tuk, Sam Mun Tsai, and on a ferry ride during golden hour here in Hong Kong.


On that particular ferry ride, as our vessel entered Victoria Harbour, I caught sight of a surprisingly large crowd at what I now know is the Sai Wan Swimming Shed and even larger mob of photographers positioned at one tip of the Western District Public Cargo Working Area.  There and then, I mentally marked down those sites as places I should go check out, preferably around sunset at some point.


For the record: today wasn't the first time that I was over at this wharf area that's come to be known as Instagram Pier (due to its popularity with photographers), including at sunset.  However, this occasion was the most satisfying as far as getting cool sunset views and snaps are concerned!  Still, even when the conditions for taking photos were not as ideal, I've generally had a good time walking about in the area as there seems to always be a refreshing breeze blowing, the waves in the harbor can make for a hypnotic sight, and it's a fun place for people-watching.

A case in point: this evening, in addition to the expected horde of photographers and the usual joggers, bicyclists, dog-walkers, anglers and pairs of lovebirds, there also were a couple of guitarists, at least one person with a drone, and a man with his remote-controlled toy fire engine which came complete with a realistic sounding siren! All in all, par for the course, and giving a good idea of what Hong Kongers like to do when at leisure! ;b
Posted by YTSL at 11:21 PM

As far as seeing the sunrise you don't have to be an early bird as such. Years ago my wife worked the overnight shift and a printing and typesetting company (obviously many years ago). She was in an east-facing relatively high floor. Whenever the pressure of deadlines permitted--not often--she and others on the shift would watch the sun come up.

A nice thing to do on a clear day with a sharp horizon.

I'm a nightowl but I'm not one to stay up all night. Indeed, believe it or not, I never pulled an all nighter throughout college -- I love my sleep too much! ;b