What a Wonderful Family! II is yet another gem of a Yoji Yamada movie (film review) 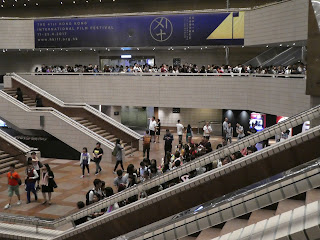 
At the 31st Hong Kong International Film Festival ten years ago, I had the privilege of being in the audience for what must have been one of the best received movies that's ever screened at the Hong Kong Cultural Centre.  As wave upon wave of near hysterical laughter filled the vast auditorium where close to 2,000 people were enjoying their viewing of Bubble Fiction: Boom or Bust, I got to thinking that this was the kind of wonderful experience that film fans lived for, and wondered when -- if ever -- I'd experience its like again.

Strongly suspecting that Yoji Yamada's What a Wonderful Family! might elicit a similarly positive reaction, I sought to get a ticket for its HKIFF screening last year but ended up only getting to see it when it was released in local cinemas.  This year, however, I was not to be thwarted in my getting into the fest screening of that entertaining Japanese comedy's sequel which, to add to my delight, was held at the Hong Kong Cultural Centre's Grand Theatre.


Beginning with events taking place close to where the first movie about the Hirata family left off, it can feel like only yesterday since those characters' actions provided us with much amusement along with some food for thought.  This time around though, youngest offspring Shota (Satoshi Tsumabuki) and Noriko (Yu Aoi) are now married and living in their own abode, away from Shota's parents Shuzo (Isao Hashizume) and Tomiko (Kazuko Yoshiyuki), elder brother Konosuke (Masahiko Nishimura), sister-in-law Fumie (Yui Natsukawa), and their two sons.

Still, like with sister Shigeko (Tomoko Nakajima) and brother-in-law Taizo (Shozo Hayashiya), the pair continue to interact with their relatives, including whenever a family meeting is called to deal with a matter posing a concern to more than one member of this actually pretty close-knit brood -- such as the 73-year-old patriarch's insistence on going behind the wheel despite his driving abilities not being as adept, and safe, as it used to be.  But even while there's some fear (particularly on the part of Shigeko) that Shuzo might have a fatal accident before too long, it's actually the death of another septuagenarian that threatens the family's happiness but then also has the Hiratas revealing their good hearts.

Before we proceed further: here's serving up a reminder that What a Wonderful Family! II is actually a comedy.  Those familiar with Yoji Yamada's oeuvre should know that he's adept at mixing comedic moments, pratfalls and all, with heartwarming ones.  And the octogenarian filmmaker does deliver laughs aplenty in this fun movie that admirably broaches topics many others mining for laughs would not dare to approach.

Still, what I loved most about this particular offering is how wonderfully drawn many of the characters are -- so much so that even while they can sometimes feel larger than life, they also can feel very familiar, like family even, despite someone like myself having only spent about three hours in their company, and only virtually at that!  Something else I really appreciate is that, like with his compatriot Yasujiro Ozu (whose seminal Tokyo Story was the inspiration behind Yamada's Tokyo Family), this auteur is able to show that movies can be thoroughly interesting without needing a villain in the piece; with What a Wonderful Family! II being a great and very enjoyable case in point.