A little after 7am on the morning of the fourth day of our Hurtigruten cruise, ship-wide announcements were made about our going to be crossing the Arctic Circle in approximately 10 minutes.  Thus forewarned, I put on several layers of clothes and then hurried outside to catch sight of the globe-shaped Arctic Circle Monument installed on the island of Vikingen that would provide us with visual evidence of our having passed the imaginary line at 66 degrees, 33 minutes north latitude, north of which we'd experience 24 hours of daylight this time of the year.

Six days later, the MS Richard With crossed the Arctic Circle again -- this time on the southbound section of its voyage.  Both our entering the Arctic and leaving this cold region of the planet were marked by special ceremonies that were memorable and, yes, entertaining.  So, strictly speaking, it's not like there's zero ship-board entertainment supplied by Hurtigruten; it's just that, well, it's not all that conventional! ;b 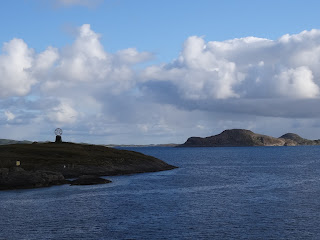 At this point in the cruise, our ship had not yet crossed the Arctic Circle 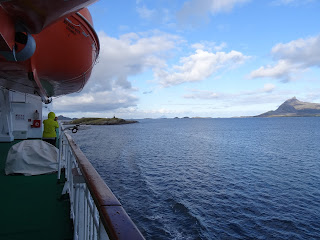 When I took the above photo a couple of minutes later though,
we were already in the Arctic :) 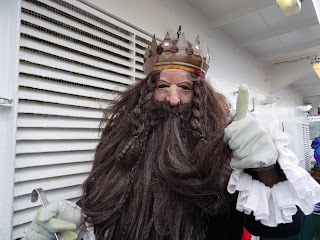 To commemorate our crossing into the Arctic,
King Neptune came on board the ship! 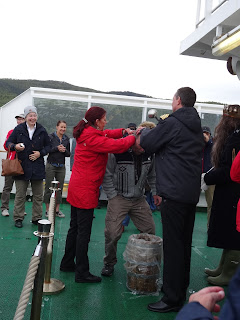 Together with the ship's captain, tour leader and assistant,
he ladled ice cubes and water down the back of people's necks! :O 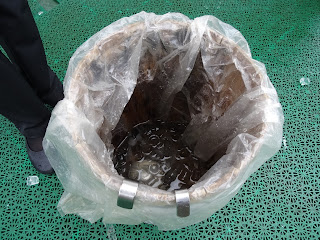 If you thought I was kidding about the ice cubes and water
-- and yes, I couldn't stop from screaming out loud when
they got ladled down my back! ;b 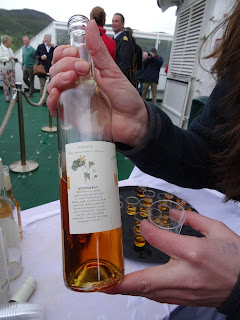 As compensation, all those who underwent the "ceremony"
got to have a shot of warming cloudberry liqueur afterwards :) 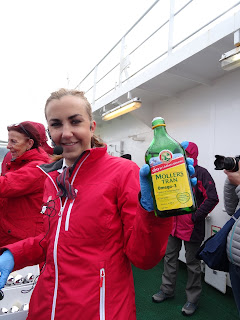 Tour leader Anna Olivia Wallinder shows the large bottle
of cod liver oil she dosed people with after we left the Arctic! 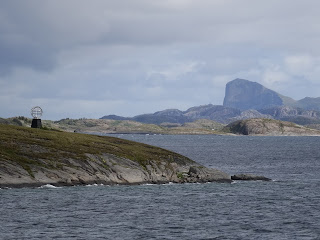 One last look at the scenery at and near the Arctic Circle
at Vikingen Island that's so gorgeous it can take one's breath away :)
Posted by YTSL at 6:21 PM

I can see by looking at these photos, this would be a good cruise journey for those who like to stay within sight of the land...The top two photos and the bottom one capture scenes from what looks to have been a memorable cruise adventure (but not for those who prefer tropical islands because this looks like the realm of Nordic gods).

I'm so glad I managed to give you an accurate impression of what the Hurtigruten cruise is like! BTW, your tropical islands reference makes me rue there not being a Hurtigruten equivalent for the Okinawa Islands!!! ;D