Cologne Cathedral views from a variety of angles (Photo-essay)


Variety, as the proverbial "they" say, is the spice of life. Hence it was that a couple of days after getting "churched out" while visiting the church-filled and cathedral-dominated town of Speyer, I got my German friend to agree that, even though it also is home to twelve important Romanesque churches as well as a UNESCO World Heritage listed cathedral, we would restrict ourselves to visiting just one Christian place of worship over the course of the two days we spent in Cologne.

As one might expect, the one religious establishment we visited in Cologne was its magnificent cathedral that took more than 600 years to be completed. And while six centuries does seem like an uncommonly lengthy amount of time to devote to constructing a single structure, the following photo-essay should help provide some visual evidence of the Kolner Dom's huge size and the incredible amount of detail adorning much of it; both aspects that go quite a ways to help account for the many man-hours spent working on this undeniably impressive edifice... 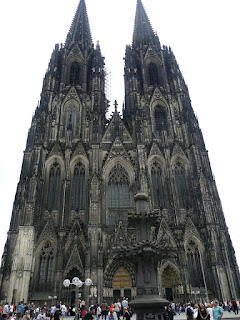 The first photo I took in Cologne was of --
you guessed it! -- its monumental cathedral 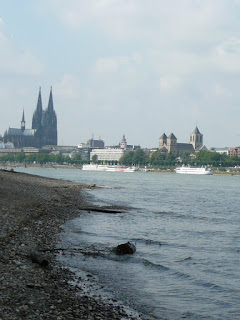 Even from a few kilometers away, and the other side
of the Rhine, it's hard to ignore the fact that
Cologne's cathedral dominates the city's landscape 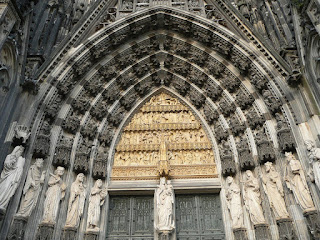 Close up shot of the cathedral's south portal 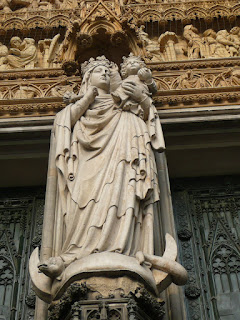 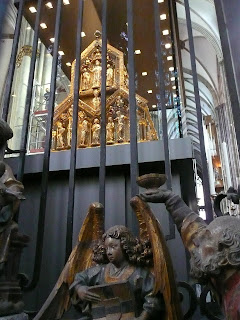 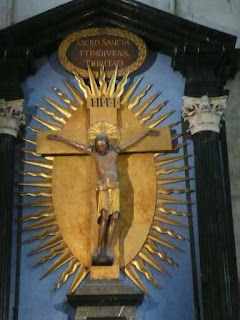 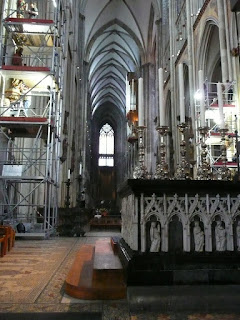 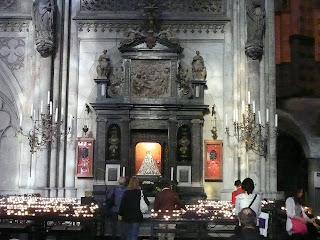 For all of its undoubted artistic value and beauty however,
the cathedral undoubtedly remains primarily a place of worship
for many -- something that, despite not being all that
religious inclined myself, I nonetheless found pretty touching
Posted by YTSL at 10:24 PM

I really like the image that includes the restorers working on scaffolding inside the cathedral--there is so much in the picture!

The ceiling trusses going all the way to the top of the picture say "Gothic" in a lovely way and the figured silver (?) candlesticks in the foreground share some of the combination of lightness/mass that the building itself has although they seem more on the massy end things. Nice detail on the lower part of the altar.

I think you captured quite a lot in that one picture.

Hallelujah -- finally a comment about this post! Thanks for liking that particular photo -- and have to say that I really liked that there was so much to look at and visually appreciate in Cologne Cathedral. :)

I particularly love portals of this type with such intricate carving. The innermost portion is a different colour - was it painted or made from sandstone? I would have thought sandstone too soft to weather many years.

From what I can gather, it does seem that Cologne Cathedral is at least partially constructed out of sandstone. Hence it being so that -- this a quote from one of the pages I linked to in the entry -- "[t]he building is rarely completely free of scaffolding and renovation work, as wind, rain, and pollution slowly eat away at the stones. The Dombauhütte, which does the repairs, is said to employ the best stonemasons of the Rhineland."

It is a beautiful cathedral. I enjoyed Cologne and learned a lot. I did not realize the Roman and Catholic influence in the city. I was fascinated with St. Ursula.

I too had a great time in Cologne and when my German friend asked me to tell her what were the top 5 places I went to on my most recent holiday, named the Cologne cathedral and one of its museums in my list. Re Saint Ursula: so sad...