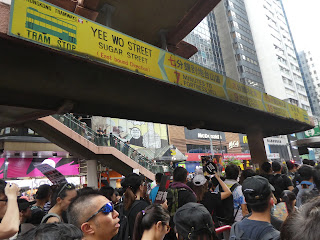 It took far longer than 7 minutes to get from Victoria Park
to this point in Causeway Bay by foot yesterday! 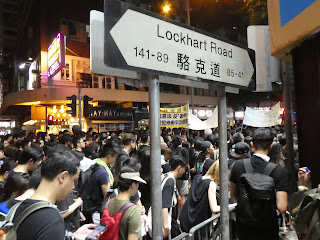 Until yesterday, I had never ever walked on
Lockhart Road on a protest march before :O 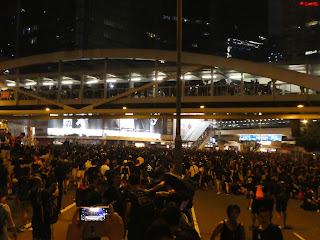 
I live in a fairly conservative part of Hong Kong and often suspect that I'm the only person in my building who goes to pro-democracy protests.  So imagine my surprise yesterday afternoon when, after the elevator doors opened for me to get inside, I saw that nearly everyone already inside the elevator were dressed in black -- the designated color for yesterday's protest march -- and I wasn't the only one who got out and headed in the direction of Victoria Park -- the protest march's scheduled start venue -- afterwards.

A day earlier, a couple of friends and I had discussed our worries that some people would decide to drop their protest efforts after Carrie Lam announced the suspension of the anti-extradition bill that has had so many Hong Kongers up in arms.  One reason was that gullible individuals might have looked upon it as a major concession on the part of her government even though it wasn't an outright withdrawal of the proposed bill that would allow for legal China extraditions in the future.  And in the wake of the unprecedented level and amounts of police brutality that took place in front of cameras and the media on the streets of Admiralty on Wednesday, there also was the possibility of other folks being scared off taking part in protests (despite the vast majority of them being overwhelmingly peaceful and non-violent).


The closer I got to Victoria Park though, the more I got to realizing that my doubts about there being a good turnout were unfounded.  And long before the protest's end, I knew that the turnout was more sizeable than the previous Sunday's -- which already had been one of the largest that there has ever been in Hong Kong!


Once more, like with the anti-extradition bill protest marches that had taken place in April and last week, the organizers felt obliged to begin the march earlier than scheduled because of the greater than expected numbers of people who had turned up some time before the protest's official start time.  Unlike the case for quite a while though, yesterday's protesters had been allowed to assemble on Victoria Park's football pitches.  (In fact, my records show that this was the first time in some three years that this was so.)  And for the first time ever, all the lanes of Causeway Road were open to protesters right from the start of the march!

With all the lanes of Causeway Road and Hennessy Road opened for the use of the protesters, and sections of the likes of Lockhart Road, Jaffe Road, Gloucester Road and Connaught Road opened up as supplemental protest march routes, I literally found myself marching along new protest ground for parts of yesterday's event -- whose protesters were now also calling for the condemnation of this week's many instances of police brutality and the withdrawal of the designation of Wednesday's protests as riots and along with the withdrawal of the proposed extradition bill, and Carrie Lam's resignation.  But if you thought that all this extra space meant that movement along the protest route was much smoother than easier than last week, here's letting you know that it was far from the case.

Rather than this being the fault of the police, however, the fact of the matter was that the streets and roads were so packed with protesters that there often really wasn't much room to move!  All in all, it was estimated that some 2 million protesters -- more than 25 percent of Hong Kong's population of 7 million! -- turned up to be seen and heard over the course of yesterday's march between Victoria Park and the Government headquarters in Admiralty!!


Having started moving out of Victoria Park at 2.45pm (15 minutes ahead of the 3pm scheduled start), I only made it to the front of Sogo, the Japanese department store that's a Causeway Bay landmark, after 6.20pm.  And it wasn't until approximately 8.30pm that my group of friends got to Harcourt Road -- where I had last been on Wednesday afternoon and had got to thinking, after the events that unfolded later that day, that I never would have the privilege to sat foot on ever again.

Before leaving Admiralty, we had one last thing to do: go to honor the protester whose death on Saturday night stunned a city already in shock at the events of the past few days.  And because the past few days' events have left us all feeling like we can't take anything for granted any more, I spent the rest of yesterday hoping that there would be no outbreak of violence -- and was so very relieved upon waking up and checking the news to find that was not so, and that peace has prevailed throughout today too.

All in all, I think it helped that the police appear to have not only reined themselves in since Wednesday's insanity but actually have a minimal presence at yesterday's protest march.  And I think it says so much that because -- not inspite -- of their general absence from the scene, the protesters were not only peaceful and in good spirits but also incredibly patient; with this mega protest march having been the very rare Hong Kong protest march where I didn't hear demands of "hoi lo" (Cantonese for "open up the road") even once in what turned out to be the seven hours or so (if I include the time spent getting into, and waiting at, Victoria Park and such) that I spent taking part in the protests yesterday!

Something else very noticeable about yesterday's protests was that even while many of the participants were very upset and angry with Carrie Lam and the police, these emotions have actually been channelled in a most positive manner to produce actions that have left much of the world in awe and admiration.  Long may this continue, and I sincerely hope -- and it's worth noting that I'm feeling far more hopeful than I was this time last week or any day of the past week -- that all these efforts will end up not being in vain.
Posted by YTSL at 11:42 PM