Criticism is positive, and will help keep the Hong Kong spirit alive! 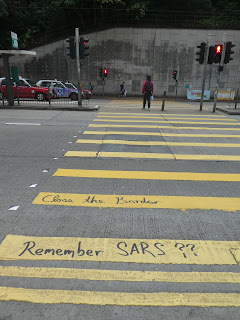 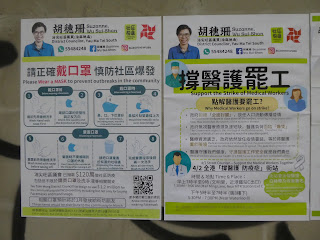 Another photo from last February 8th: Yes, some people have been
advocating wearing masks and supporting medical workers
for more than a year now!
As I write this blog post, still more -- yes, you guessed it! -- "ambush-style" lockdowns are taking place in parts of Hong Kong.  Tonight, the ninth straight evening that this has happened, sees buildings in Jordan and Sham Shui Po placed under lockdown.  And after the previous night's turned up four Wuhan coronavirus cases (from over 2,000 people tested), you just know that the government is going to consider these operations a success; this even though yet another medical expert (University of Hong Kong microbiologist Dr Ho Pak-leung this time around) has come out and stated that the government is locking down the wrong places.
The sense that I'm living in a nightmarish version of Groundhog Day (the movie) here in Hong Kong is compounded by the news yesterday that police officers attached to the National Security Law had arrested the radio host best known as Giggs again.  (The first time they did so was back in late November last year.)  And this is before factoring in that tomorrow, Jimmy Lai will go to court once more (this time to hear the Court of Final Appeal's verdict on his bail hearing).
Truly, it is hard to not feel numb, if not bored, when reading what can appear to be the same bad news over and over again.  But it's imperative that we don't feel this way because, among other things, we really don't want for the current state of affairs to become the new, accepted "normal"; this not least because it's hard to shake off the feeling that if we do, (much) worse will come.  For many people, the story of the boiling frog is really pertinent to Hong Kong's situation these days.
With regards to the "ambush-style" lockdowns: Their optics still can look alarmingly bad but the frequency of their occurence appears to have led operations to go on more smoothly now.  There are reports that the food -- or, at least, the cup noodles -- supplied to residents affected by the lockdown has improved.  And a friend whose building was one of those locked down last night praised the medical personnel who he dealt with as efficient and courteous.
Even while all this may well be the case, one can't forget the fundamental fact that the Hong Kong government has taken to openly ambushing its own people.  Which makes it, in the words of Margaret Ng, "a government that wrongs people."  And, okay, yes, this is all for the sake of public health currently.  But with a wide-ranging national security law in place, it surely will be just a matter of time when attempts will be made to effect "ambush-style" lockdowns in the name of national security?
Doubtless there are people who think that it's best to stop complaining and be quiet.  After all, what good has protesting done for Hong Kong?  Call me delusional but I still do believe that, without protests, all the ill that has beset Hong Kong in recent years would have occurred even sooner.  The frog would still have been boiled, just less noticeably.
Also, funny but true: as a Hong Kong woman noted to her fellow members of a Clubhouse room that included Mainland Chinese along with Hong Kongers (before the Great Firewall of China came down on Clubhouse), "one of the biggest cultural differences between HK & mainland is that HKers aren't used to things being described so positively all the time. "We criticise day in day out…when we're critical we’re not just criticising mainlanders. We criticise everything”".  In other words: criticizing is very much a part of being a Hong Konger.  And here's adding the thought that maybe it's Hong Kongers' unwillingness to accept that things can't be better that has propelled Hong Kong and keeps it very spirit alive?!
Posted by YTSL at 11:36 PM