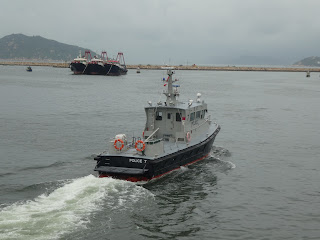 I wonder if Hong Kong's marine police are better
behaved/looked upon than its land force? 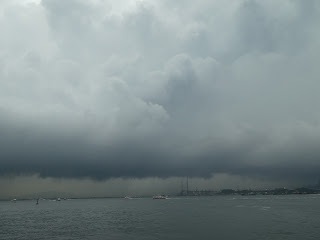 I took a couple of visitors from the USA to Cheung Chau yesterday afternoon.  Like pretty much everyone I've introduced to this Hong Kong Outlying Island, they were charmed by its laidback vibe and photogenic scenery.  As we strolled about the place, stopping from time to time to take in the sights and do such as eat a stick-worth each of Cheung Chau fish balls, the island worked its magic on me too and I found myself feeling better and more relaxed than I generally have for much of the past couple of weeks.


Sadly, my mood darkened somewhat again on the ferry ride back from the island after I caught sight of a police boat early on in the journey and then again when I saw threatening-looking storm clouds approaching when our ferry approached Central.  On both occasions, those sights got my thoughts turning once more to the political unrest that Hong Kong is currently experiencing.  And while the past few days have seen far less action on the streets than not so long ago, I know that wheels continue to churn behind closed doors and battles continue to be waged in cyberspace and elsewhere.


There are those who can be amazingly blithe about this whole situation (such as the person who actually felt it was perfectly acceptable to email me about cocktails on the night of June 12th). I, on the other hand, find myself unable to not worry quite a bit -- and probably more often than may be psychologically healthy -- about the future of Hong Kong, and my future in this part of the world which I have come to love dearly.

I try to take each day as it comes and am grateful for every day that passes without any more police violence and crackdowns against protesters of the extradition bill (that sought to amend Hong Kong's current Fugitive Ordinance).  But the very fact of that bill having been suspended rather than outright withdrawn makes me feel that a veritable Sword of Damocles continues to hang over Hong Kong, and gets me looking ahead and trying to ascertain when the authorities will abandon their current, uncharacteristic "softly, softly", "don't rock the boat" approach in favor of a more Draconian one.


China has said that it doesn't want Hong Kong to be on the agenda at the G20 summit in Osaka later this week.  I'm sure it also would love for nothing considered globally newsworthy to occur in and/or come out of Hong Kong from now through the end of Xi Jinping's visit to Japan to meet with other G20 leaders -- even while opponents of the proposed extradition bill, the most unpopular Chief Executive in Hong Kong history and her Beijing overlords would like Hong Kong -- specifically, the battle of the wills between its people and the Chief Executive few whose selection few of us had any say about -- to continue to attract the attention of the world.

Viewing this in terms of the likelihood of violent suppression of protesters here in Hong Kong, my sense is that great efforts are currently being made to rein back whatever inclination there is on the part of the local constabulary to strike hard against those they view as disrespectful troublemakers until at least the conclusion of the latest G20 Summit.  On the other hand, I must admit to feeling some doubts and worries about how peaceful this year's July 1st protest march will be.

There are people whose biggest reason for not taking part in political protests is that they fear for their physical safety and well-being.  Frankly, I "get" them more than than those who simply don't care enough to do so as well as the minority who actually still think that Hong Kong is best served by doing what Beijing wants.  For my part though, I do intend to be among the participants of the third of these annual pro-democracy rallies that will take place since Carrie Lam's installation as Chief Executive of Hong Kong -- and whose attendance figures I am expecting to be considerably higher than the previous two combined!
Posted by YTSL at 11:30 PM

I have to wonder how Trumps and his tariffs having effect on every day people there?
Coffee is on

Hong Kong is different from the rest of China when it comes to tariffs being imposed and such (as well as, say, internet censorship, food safety levels, judicial systems). So I can't speak from personal experience about Trump's tariffs on everyday people in Mainland China.