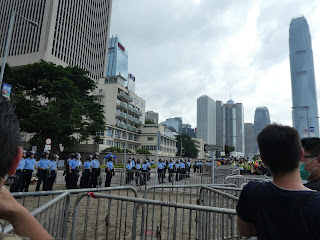 How I wish it had stayed at the level of staring contest yesterday
As far as I know, Hong Kong is not (yet) a police state nor under martial law.  As I write this though, there are reports of the Hong Kong police bidding to go to university residential halls to search student rooms there; this some 48 hours after they went about stopping people with backpacks and asking to see their contents at Admiralty for a time (before they were confronted by pro-democrat lawmakers who rushed to the scene and got grossly outnumbered by civilians -- some of whom, it turned out, were members of a Christian prayer group meeting up to sing hymns in the area).
So the unrest here is not over by a long chalk.  And even though there were attempts to get things back to normal today after yesterday's insanity, I reckon it speaks volumes that for all of today, the upscale Pacific Place Mall was closed for business, and normally busy Admiralty MTR station was also closed for all of the morning and some of the afternoon; something that didn't even happen during the 79 days of the 2014 "Occupy" phase of the Umbrella Movement.

Left in shock by the police brutality (more so, I reckon, than the actual political protests) that occurred in plain sight in front of cameras, the media and thousands of onlookers yesterday, many of us in Hong Kong spent today trying to catch our breath, trying to make sense of it all and re-thinking our options.  Quite a few of us also have been engaged in discussions, arguments, and a war of words and images on social media.

The injunction to not talk politics (or religion) in polite company is well known.  And I do get the feeling that it'd be easier to have and preserve friendships if people don't discuss politics with one another.  At the same time, there's a school of thought that is of the opinion that it's valuable to talk politics with friends -- since, among other things, you might learn more about a person that way that will make you decide whether or not you really want to be or remain friends with that individual.
Here's the thing: I actually consider myself fairly open to being friends with people possessing a variety of viewpoints (along with being from a diversity of ethnic backgrounds, nationalities, age groups, educational levels, etc.).  At the same time though, there are certain lines of thought and opinion that, if crossed, make me disinclined to associate with those who do so.
The key thing though these days, it can seem, is that we appear to be increasingly getting our news not only from a variety of sources but ones that are so divergent in opinion from one another that they fall into the category of "fake news" or untrustworthy sources for one even while being completely fine for the other.  And that, sadly, is what I've been encountering today by way of such as Facebook posts shared by certain Facebook friends.
More specifically, I've come to realize that I have Facebook friends who aren't only apathetic about what's going on in Hong Kong but also ones who actually believe that the protesters are violent thugs who have wronged society and caused the police terrible injury.  Fueled by what the likes of myself look upon as patently false assertions by 777 and the incumbent Hong Kong police chief of protesters having thrown bricks and sharpened poles at the police (but no photos of which appear to have been captured; and which no journalist on the scene, including those working for CNN, look to have witnessed), they appear to genuinely believe that the anti-extradition bill protesters who assembled at Admiralty yesterday were/are rioters.
While that's already pretty shocking to me, what really takes my breath away is their apparent tendency to look upon the protesters' "weapons" (e.g., plastic bottles of water, hardhats (which often were worn far more than thrown) and umbrellas (which I'm sure were used for defence against pepper spray far more than to, if ever, poke at the police)) and somehow make it seem as though they were as dangerous as the trained, armored police's pepper sprays, smoke bombs, tear gas (of which 150 rounds were fired yesterday -- almost double the amount fired during the whole of 2014's 79 day "Occupy" period) , rubber bullets and bean bag rounds!

Honestly, this kind of thinking makes me want to cry.  One reason is because I'm not sure how it could ever be reconciled with those -- and I truly hope it's the majority -- who see police brutality and a totally unfair "fight" yesterday for what it is.  For another, while in Admiralty yesterday, I saw how so very young many of the assembled protesters were and, also, that those -- and far from all -- of them who were putting on "protective gear" were attempting to fashion "armor" from the flimsy likes of clingwrap and cardboard -- and it really pains me so that they have been so terribly mis-represented, and that those mis-representations are actually being believed. :(
Posted by YTSL at 11:29 PM

You know, YTSL, during the Umbrella and Occupy Central movement, a young leader at the church that I attended at the time wrote in the church news that tear gas isn't a particularly destructive weapon. I was furious, and still believe that he is so ignorant and wrong.

It amazing what people believe. I only believe less then fourth what I read on the net. I find every day blogger who just like to share things. Does have an interesting take on things.
Coffee is on

As I suspect you know, tear gas is banned in warfare under the Geneva Convention. So the fact of the Hong Kong police firing so many rounds of it at civilians in 2014 and now again in 2019 is really horrifying and wrong.

I'm not sure what the percentage is of what I read that I believe. I do try to make it a point to know the biases of my news sources though and am one of those people who tend to be particularly suspicious of those who claim to be "objective" and "impartial" at all times.