Feasting on kaisendon at the Shiogama Seafood Wholesale Market ;b 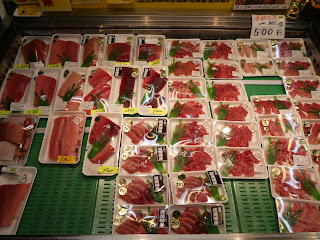 Tuna on sale at a stall in Shiogama Seafood Wholesale Market :O 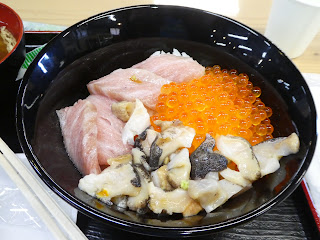 The kaisendon I assembled and devoured for lunch that day :) 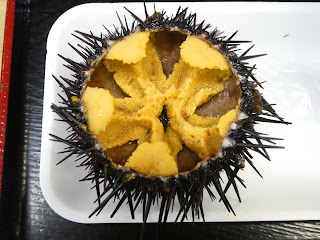 The highlight of my meal -- uni straight from the shell! :O
On the second night of my recent Japan trip, I had a delicious dinner at a Sendai sushi-ya whose name I don't actually know as it wasn't written anywhere (be it the outside or, say, on the menu or bill) in Romaji -- and for the record, neither was anything on its menu.  On occasions like this, I feel really relieved and happy that I know enough "food Japanese" to be able to not only get by at such dining establishments but actually order a pretty good and varied meal: as in one that consisted of four types of sashimi of my choice, nine different pieces of sushi, and two glasses of junmai ginjo sake!
For most people, that might be enough sashimi and sushi for days, even an entire Japan trip.  I, on the other hand, ended up following this up by having more raw seafood for lunch the next day at an area seafood wholesale market that's one of the largest in East Asia in a town with the highest number of sushi restaurants per capita in the entire country!
The Shiogama Seafood Wholesale Market is housed in premises built after the previous one was destroyed by the tsunami that swept into the area in the wake of the earthquakes of March 11, 2011. Large but pretty basic looking, it doesn't look all that visually impressive from the outside but what treasures await inside!  More specifically, there are over 140 stalls in the 4,950 square meter facility -- and one can go around buying up portions of seafood of one's choice before going and buying a bowl of rice and miso soup, and assembling one's own kaisendon (seafood rice bowl).
Walking into the market -- which, despite its name, is open to the public rather than just restricted to wholesalers -- at around 11.30am (after a train ride from Sendai to Shiogama, followed by a bus ride from the train station), I actually wasn't feeling all that hungry but told myself that I could at least stroll around the place and enjoy seeing what I knew -- from visits to the likes of Tsukiji -- would be a pretty cool variety of seafood on offer.  But then I saw what was on offer there -- and the prices that they were on offer for -- and knew that I absolutely couldn't pass up the opportunity to assemble my own kaisendon -- and, then, of course devour it -- at this venue!

The following rundown of my meal and its cost should get food lovers salivating.  A bowl of rice (on which I'd lay out various ingredients from the sea) and miso soup = 400 Yen (~US$3.69).  A portion of pickles (essential when eating sushi for me) = 50 Yen (~46 US cents).  A portion of tsubugai (Japanese whelk) that would be delicious since I had just had some of that the night before = 500 Yen (~US$4.61).  Four super fatty slices of otoro (fatty tuna) = also 500 Yen (~US4.61)!  A large packet of ikura (salmon roe) = 800 Yen (~US$7.38).  And, finally, the pièce de résistance of the meal for me -- uni in the shell = 800 Yen (~US7.38) too.
So, yes, my entire meal cost a grand total of 3050 Yen (~US$28.14) -- which I consider a pretty good price for this incredible richness that I have to admit to struggling to finish.  And yes, I got to realizing midway through my feast that I had gone sorta beserk at the market and gotten more than than my stomach actually was comfortable with at that time of the day... but then, can you blame me (this especially since I don't know when I'll be in this part of Japan again)?!
Posted by YTSL at 7:14 PM

That Otoro looks dripping with fatty juices ... and 125 yen a slice is just unheard of!

I bet your market our packed.
Coffee is on.

The otoro was indeed super fatty (as well as a great bargain). Would you believe it if I told you that it caused me to have something akin to the "meat sweats" I had while eating the super fatty Hidagyu in Takayama last year? ;b

Actually, the market wasn't packed at all! I think it's because I visited after the majority of the wholesalers had done their marketing and it still doesn't attract that many tourists as it's not in a major tourist town.