Musing on yesterday's historic mega-sized protest the day after 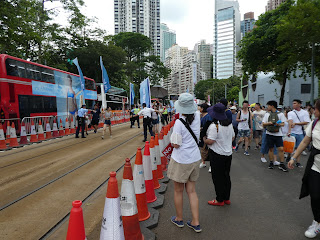 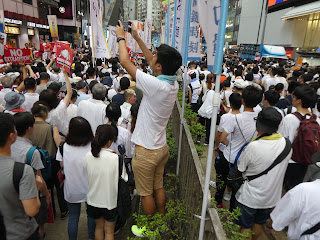 Eventually, all of Hennessy Road's lanes -- and more --
were opened up for the protest march! 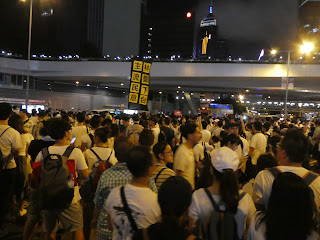 Even so, many protesters took so long to get to the vicinity of
the scheduled end point that a key road leading to it was open again
to vehicular traffic by the time we got there that evening :(


Around the same time that I wrote yesterday's blog post, the Hong Kong police bid to remove unarmed protesters from the area near the official march end point in a manner that was lamentably violent.  Rather than focus on the huge and predominantly peaceful protest march that had taken place earlier in the day, some news purveyors opted to lead with reports about the violent clashes between protestors and the police that occurred after the vast majority of yesterday's anti-extradition bill march participants were safely back at home.


I'm not going to excuse those protestors -- some of them reportedly barely in their teens -- whose tempers boiled over late in the day but here's pointing out that the Hong Kong police spent the good part of yesterday trying to frustrate march participants.  It started with their denying protestors entry onto the football pitches at Victoria Park (from where one would be able to take a more direct path onto Causeway Road to properly start the march) and then refusing for a time to open up extra lanes for the march -- whose large participant size they recognized when they asked the march organizers to start it at least 15 minutes ahead of schedule.


In so doing, they caused march participants to have to stand for minutes on end at various sections of the route (with the apogee for my section of the protest involving taking one hour to move from one end of Pennington Street to another; something which normally would take less than 10, even 5 minutes).  Because of their employment of tactics obviously designed to delay and frustrate, many elderly folks and parents with children bailed out midway through the march, and some people ended up requiring medical treatment after standing for hours under the hot sun and in super crowded spaces.


Those of us who stuck it out found ourselves out out on the road for six hours in my case -- which seems to be the average people took to complete the protest march and by no means the lengthiest time spent doing so.  In some cases, quite a bit of time and effort also was required to even get to the march start since up to five MTR stations were bypassed by trains for a time due to "crowd control" needs and there also were crazy queues for the Star Ferry to Wan Chai.


Eventually, all the lanes of Hennessy Road and even sections of road that aren't usually considered part of the protest march route (including a section of Lockhart Road I had hitherto looked upon solely as a bar area!) were opened up for the use of protesters.  Nonetheless, not only had darkness fallen by the time the group of friends I was with got to Admiralty, we also found our path to the official march end at the Legislative Council complex blocked since Harcourt Road was filled with vehicles once more.

I'm not sure why that was the case but a friend suggested that the scheduled march time had elapsed long before we -- and a good many other march participants -- had got to the area; thanks in no small part to our having been held to a standstill at several spots along the march route by the sheer size of the crowd but also, I'm sure, delays created by the police.  (As veteran protest march participants have come to look upon it, the police seek to "play games" with protesters with the aim of frustrating people, and causing the less patient and tolerant to give up and walk away -- and with the possibility too of tempers coming to a boil and violence ensuing.)

As I understand it, the clashes between the protestors and the police that ended up taking place were because some people wanted very much to cross Harcourt Road over to the Legislative Council complex.  But if the police hadn't delayed and impeded the march progress, I'm sure the majority, if not all, of the over 1 million march participants would have been able to make it to the official march end without any violence ensuing.

On a more positive note: I not only found the sheer size of yesterday's protest awe-inspiring but that, if the official figure of over 1 million participants is to be believed (and why not when you see the crowd images?!), this means that approximately 1 out of 7 Hong Kongers were out protesting in the streets.  Something else I found pretty amazing was that this proposed extradition bill has spurred a number of people who had previously never taken part in an organized political protest in their lives to respond to the call for action yesterday (with one third of my group yesterday falling into that category)!

As a friend said to me at one point yesterday afternoon, it is sad that there has come to be a time in Hong Kong when people feel that their lives and their Hong Kong is in serious danger.  (To put things in context: Hong Kong's current Chief Executive, Carrie Lam, has now brought more protesters out onto the streets at any given time than the likes of Leung Chun Ying and Regina Ip combined!)  At the same time, it also is heartening to see that so many people do care for Hong Kong and aren't prepared to take the authorities' proposed actions quietly and sitting down.
Posted by YTSL at 11:30 PM