Protest march with over 1 million others in Hong Kong 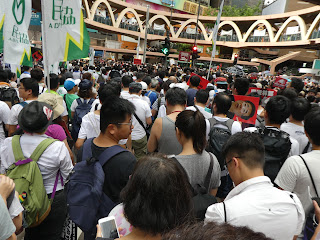 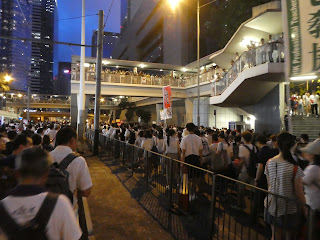 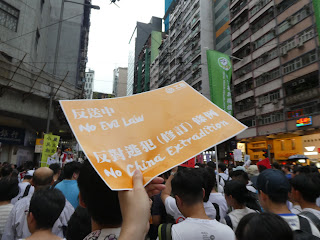 The message that Hong Kong people want to send to
their government, and the watching world
I have been to protests with over 100,000 people before in Hong Kong -- including as recently as this past Tuesday (if you consider a candlelight vigil to be such) and this past April (if you don't).  And I can tell you that their numbers pale compared to the number of people who went out on to the streets of Hong Kong this afternoon to protest against the government's proposed extradition bill (which involves extraditions to Mainland China).

The organizer's of today's protest march estimate that over 1 million people turned up today to make clear their objections to the proposed extradition bill.  For my part, I can report that it took me close to six hours to walk along a route that I've done in a much shorter time because I saw an unprecedented amount of people out on the streets along with me this afternoon -- including a number of friends, and their friends and relatives -- all of whom clearly care very much about Hong Kong.
More later tomorrow.  In the meantime, I need time to rest and process what I've seen and experienced today.  At the same time, I know already to want to say thank you very much to those who made the effort to go out and take part in today's protests: one that was phenomenally large and that I truly hope will make a positive difference.
Posted by YTSL at 11:59 PM

I was told people in China couldn't petition the government. Hope all works out best for all.
Coffee is on

Hong Kong is part of China but also quite distinct from the rest of China in, among other things, currently having more rights and freedoms (including of speech and to protest) than the area you'll see me often referring to as Mainland China. (I suggest you look up "One country, two systems"). But yes, because the government is loath to listen to us, we go out into the streets to register our protest -- which is pretty obvious when one in seven Hong Kongers are out doing so at the same time, right?