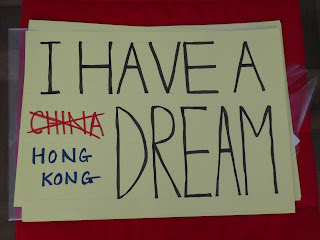 The first political poster that I've ever made 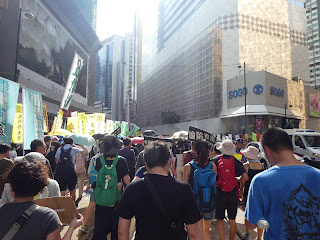 Marching from Causeway Bay to Admiralty

with thousands of willing others 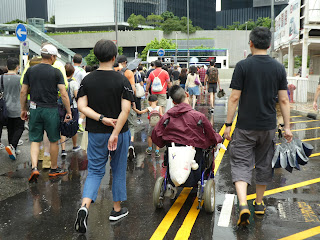 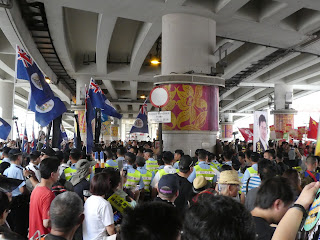 Now, both those waving the Hong Kong colonial and
Communist Chinese flags, however... though it's true enough
that, if pressed to make a choice, I'd take the former over the latter!

This past Thursday, Xi Jinping arrived in Hong Kong for his first visit since becoming president of Communist China (in March 2013).  Ahead of his visit came a massive security lockdown which, in retrospect, probably contributed to a black mood having descended upon me in recent days; not least beacuse it got me worrying that Hong Kong's on its way to becoming a police state a la Xinjiang.

But rather than put me off taking part once more in the annual July 1st protest march (which I've been going to every year since 2012, when the man variously known as 689 as well as The Wolf became Hong Kong's Chief Executive), this all made me more determined than ever to do so.  Not only that but I upped the ante this year -- the first with Carrie Lam (aka 777) installed as the new Chief Executive -- by making my first ever protest poster!

Thus it was that this afternoon saw me heading over to Victoria Park to join with other folks willing to stand up for what they believe in and seek.  A friend of mine had told me she wouldn't be joining me because "big, collective events" aren't her thing.  For my part though, I was happy to see a crowd of people milling about at the march's start point -- even while wishing more people had showed up -- and actually like the July 1st protests being as inclusive as they are.

In all honesty, I agree with a lot of the causes and concerns being voiced at this year's protest march to the government headquarters over at Admiralty.  Genuine universal suffrage for Hong Kong.  Freedom for Liu Xiaobo and Liu Xia.  Press freedom and freedom of speech.  The investigation of Leung Chun Ying's HK$50 million UGL deal.  Saving Lantau's green spaces from being destroyed by "white elephant" infrastructure projects.  LGBT rights.  Protection for North Korean defectors.  All this and more I have no problems supporting.

To be sure, I don't support the cries for Hong Kong independence.  But I'll tell you this: it was energizing and even emotionally uplifting to hear those particular activists outshouting one of the groups of pro-Beijing shills who had assembled at certain sections of our march route to hurl abuse at the protesters walking by.  (And for the record: whereas in previous years, one only saw one or two of such groups about, this time around, I saw four such pro-Beijing groups -- who were no doubt emboldened to act by Xi Jinping having been in town... though, actually, he had left by the time the protest march began!).

Other folks whose presence gave me a psychological lift -- and also left a lump in my throat -- were an elderly woman with bright eyes being pushed along in a wheelchair by others, other wheelchair-bound individuals moving along the road by themselves, a father wheeling a pram with a young 'un in it, another father who paused for a bit along the way to make sure that his young son stayed sufficiently hydrated, and two women using sign language to communicate with each other.

In addition, the sight of the yellow umbrellas out there this afernoon made me smile -- even when they were actually being wielded against the rain that periodically fell on us as well as the rays of sunlight that were on the noticeably hot side.  Considering that there were times when the sun was shining even while the showers fell, I was hoping to see a rainbow or two brighten up the sky.  That didn't happen but, at least, I came away from today's event believing that there are indeed people out there who love Hong Kong and continue to be able to dream of a bright future for it.
Posted by YTSL at 10:57 PM