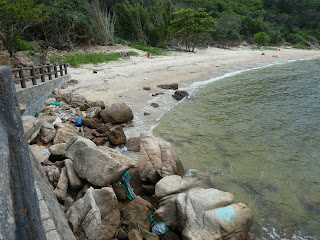 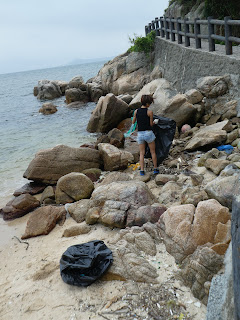 Cleaning up's a tough job -- but there really are
people who volunteer to do it! 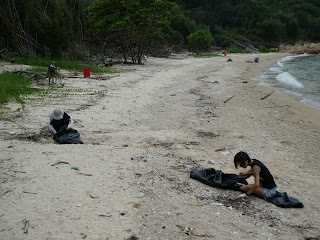 Yes, there are people who care out there!
The Hong Kong Observatory got its weather forecasts wrong again today.  Unlike last Saturday, when I got caught in a freak storm which blindsided much of Hong Kong (including its professional weather forecasters up until just a few minutes before it blew into the territory), however, I was happy for the incorrect prediction since it meant that, despite warnings of blustery thunderstorms for the day, we had nice weather conditions for the beach clean-up I organized earlier today.
More specifically: the skies were gray and overcast -- which meant there wasn't much sun to bake us and not much light reflecting off the sands to heat our faces as we worked -- but not a single drop of rain fell on those of us who turned up for yet another round of trash picking at Cheung Chau's Tung Wan Tsai (Coral Beach).  In addition, today's temperatures were a few degrees cooler than yesterday and the day before (when I got very tempted to switch on the air-conditioning in my apartment for the first time this calendar year!) and there also were really welcome breezes blowing from time to time while we were at the beach as well as on our hikes to and from it.
Speaking of hikes: I first set foot on Tung Wan Tsai some years back when two friends and I hiked around Cheung Chau.  Even now, I remember my shock upon discovering how much dirtier it was than the beaches on the island admininistered by the Leisure and Cultural Services Department over on the eastern side of town as well as thinking how beautiful it could be if it was bereft of the trash scattered all over it.
I also can remember how horrified I was at how much trash there was at this Cheung Chau beach the very first time that I took part in a beach clean-up there close to four years ago now.  Indeed, I felt so devastated at the sight that I couldn't bring myself to take any photos of -- and at -- the beach that day and actually wondered if the efforts of the group I was with actually counted for anything in the face of the large amount of garbage that polluted that part of Hong Kong.
Even while part of me felt that it would be a Quixotic or Sisyphean endeavor, however, I felt inspired by the efforts of the other beach clean-up volunteers, especially those who had returned time and time again to voluntarily do something that many people just can't be bothered to (or think is too disgusting to do).  So the next month, I went again for another beach clean-up on Cheung Chau -- and, well, the rest is history.

To cut a long story short: Not only have I been taking part in beach clean-ups in Hong Kong for some years now but I've also now organized a fair few.  Something that's warmed the cockles of my heart is that in the past year, there have been a good number of repeat participants for the latter.  Something else that I find really heartening is that those of us who have taken part in a number of beach clean-ups at Tung Wan Tsai actually can see the difference in terms of its overall level of cleanliness.
Put another way: Even while much does remain to be done, I actually do think we've made some difference after all.  And this has inspired me to think and believe that, even when one is faced with great odds, it's better to go do something -- rather than moan and groan or, worse, give up and -- in so doing -- not just let the enemy win but also defeat yourself in the bargain.
Posted by YTSL at 11:20 PM