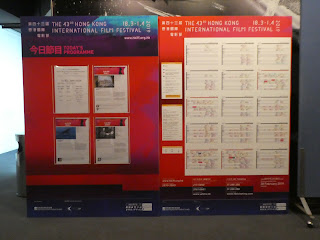 
In between the making and cinematic release of the first two films in the HKIFF's Li Lihua: Four Treasures Restored showcase that I viewed and the making and cinematic release of third offering starring Li Lihua at this year's fest that I viewed, Mainland China underwent a political revolution that saw it go from being the Republic of China ruled by the Kuomintang (Nationalist Party) to the People's Republic of China under the Communists.  These political upheavals north of the Mainland China-Hong Kong border resulted, among other things, in many people fleeing to, and re-settling in, Hong Kong -- including many leading lights of the Shanghai film industry such as this 1951 movie's director, producer (Fei Mu) and lead actress.


Set at a time when much of China was under Japanese military rule -- another tumultous (then) recent period of history which the cast and crew had personal experience of -- The Flower Girl is a Chinese adaptation of Boule de Suif, a well known Guy de Maupassant short story set during the Franco-Prussian War.  A party of disparate Chinese individuals journey from Shanghai one fateful day.  Already delayed by the coal-fueled truck breaking down at least once and going far slower than they would like, they then find themselves detained in the town they reached before the night curfew forbidding civilians to be on the road came into effect for an indefinite period of time as a result of one of their party having caught the eye of the area's Japanese military commander (Bai Shen).
Identified early on in this emotional drama as a courtesan (a "nicer" term, like "flower girl", for prostitute), Hua Feng Hsien (Li Lihua) turns out to be a Chinese patriot and far more morally upright individual than the "higher class" members of her travelling party who initially trumpeted their outrage at her having been asked to go have sex with the covetous Japanese military officer but, then, for their own selfish reasons, put pressure on her to do just that.  A sub-plot involving a widow whose Chinese resistance fighter husband was killed by the Japanese further makes clear that people should be judged on their willingness to help others rather than their economic standing or social status.


In recent years, there have been a number of Chinese language films set during the Second World War that appear to be geared towards unifying the Chinese by getting them to hate the Japanese.  However, the apparent pillars of the Chinese establishment who figure in the more dramatically complex The Flower Girl -- namely, a couple of businessman, a scholarly-looking patriarch and their wives -- come off looking almost as bad as the Japanese occupiers; an outcome that gets me thinking that Zhu Shilin and Co were making a statement that the bourgeoisie were to blame for the Communist revolution that threw China into further tumult after the end of the Second World War and resulted in many of their countrymen and -women's exile to Hong Kong, Taiwan and beyond.


The evening after I viewed The Flower Girl, I saw another movie with Li Lihua as its female lead whose story takes place during the Second World War.  Still, there's no confusing these two works: filmed 18 years later than the earlier film, with a bigger budget (that, among other things, allowed for it to be lensed in color and feature action scenes with what appeared to be hundreds of extras) and shot in Taiwan, Storm Over the Yangtze River is as expansive in feel as the 1951 drama was often claustrophobically intimate.


A spy-thriller with lots of intrigue and double agents, this ambitious effort's story can get rather confusing to follow -- especially if one doesn't quickly realize that there are four sides (Kuomintang (Chinese Nationalists), Chinese Communists, Chinese collaborators (with the Japanese) and the Japanese) trying to get the better of one another rather than just Chinese versus Japanese.  Adding to the complex web woven in this film is that the male protagonist -- who initially appears as a traitorous mercenary, only to turn out to be a heroic member of the resistance -- is seen having few qualms about sleeping with another woman even while he is a married man with a young son.


I have to be honest and admit that, with its plethora of sub-plots and slippery characters, it took me until around the half-way mark of this close-to-two-hour movie for things to start falling into place for me.  Once the pieces in the tale start to connect and make sense though, this film -- which tells the true story of an undercover intelligence agent code named Yangtze Number One -- turns out to be a pretty satisfying watch!


Li Lihua is commanding as a Kuomintang intelligence unit head able to charm Chinese collaborators and resistance members alike.  Ko Chun Hsiung makes for a suitably handsome heroic resistance fighter.  But Peter Yang Kwan steals the show as the smooth fellow who many people -- not just this (re)viewer -- had trouble figuring which side he really was on; and it's not all that surprising to learn that he won the Golden Horse Best Actor prize for his work in this movie (and, for the record, Li Lihua also was named the Golden Horse Best Actress that year).