Signs that spring has come before the rainy season begins in earnest this year! 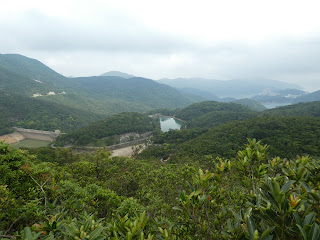 Before the rain fell 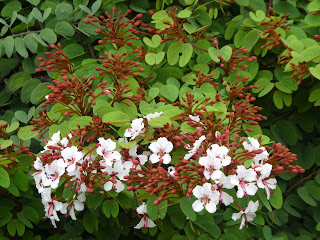 Lots of flowers and plants are already in bloom... 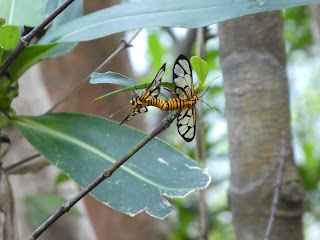 ...and mating season has begun for some wildlife! ;b
Between my trip to Phuket and the Hong Kong International Film Festival occupying a good chunk of my time last month, I didn't do as much hiking as I should have.  And after seeing that the rainy season looked to be getting going in earnest from today (with many consecutive days of precipitation), I decided I had better go spend some time outdoors before the heavens opened with a vengeance.
With the air already heavy with humidity and a high temperature for the day of around the 30 degrees Celsius, I opted for an afternoon hike in Tai Tam Country Park that began at a bus stop in Wong Nai Chung Gap and ended some three hours later at a green minibus stop in a residential section of Braemar Hill.  Along the way, I passed by, as well as caught sight of, three of the Tai Tam Reservoirs -- which were a study in contrast in terms of one being pretty full, another being completely empty and the third being not completely empty but also far from being completely full.
While the water levels at the reservoirs didn't look as terribly low as around this time last year, seeing them got me realizing that not that much rain has fallen in recent months.  At the same time though, much of the foliage was reassuringly and splendidly green.  Also, there are a lot of flowers in full bloom already, including those of the Red Azalea and Gordonia plants, which add lovely splotches of color to views of the Hong Kong countryside.

Since flowers bloom in winter in Hong Kong as well as the warmer seasons (with the Chinese New Year flower famously blooming, as its name implies, around the Chinese New Year period), however, I don't tend to equate their presence with spring, as would be the case in many other parts of the world.  Instead, the signs that really signal that spring is here for me are my being able to spot a lot of varieties of critters out and about (including butterflies that actually stop to be photographed rather than just seem to want to flit about all day) over the course of a hike, including ones which have decided that the time has come to go about procreating!
And for those who wonder, in view of my having captured so many creatures enacting such acts: no, I really don't go in search of copulating critters.  Indeed, in the warmer months, I tend to be more on the look out for snakes -- and not because I especially want to spot these slithery reptiles but because I really don't want to accidentally step on them and thereby be the target of their often downright poisonous ire!
At the same time though, I must admit that the sighting of the amorous pair of critters was one high point of this particular hike; this particularly since I had previously never come across wasp moths performing this act before and so now can add my shots of them to the subset of my photography collection which has had friends labelling me "nature's pornographer"! :D
Posted by YTSL at 11:11 PM