Taking part in a beach cleanup on Cheung Chau 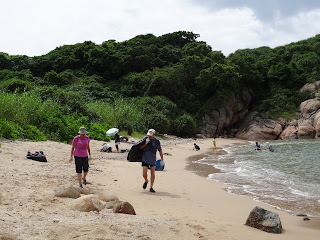 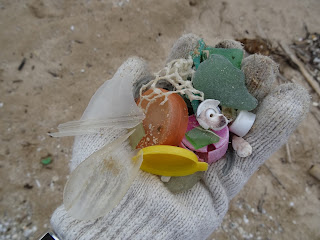 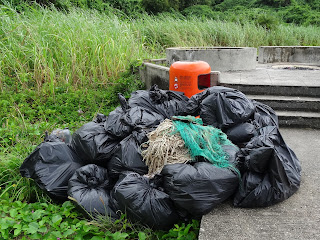 The fruits of a morning's worth of labor
of nine "sustainability heroes" ;b

Today has been one of the busiest Saturdays I've had in a while.  I just got back from watching  the English association football team I've supported since 1978(!) triumph in a match telecast "live" from England into such as the big screen of a bar in Hong Kong.  And in the afternoon, I put on a yellow T-shirt and went to Wan Chai to hang out for a time with my fellow Malaysians in aid of Bersih (the movement to demand for clean -- bersih in Bahasa Malaysia -- and fair elections (and government) in Malaysia).

While important in their own way to me, both of those events actually weren't the main event of the day as far as I was concerned.  Instead, that "honor" goes to a morning beach cleanup session over on Cheung Chau organized through Green Sustainable Living HK, a local meetup.com group founded by a Madagascar-born Hong Kong resident.  One reason for thinking this is that it was the event of the day where I felt most actively a participant.  For another, I really appreciate that there was physical evidence that people's efforts actually counted and made a difference.

Whereas my first beach cleanup had seen the group head over to Coral Beach (AKA Tung Wan Tsai) over on the northeast of the island, this time around, we headed in the opposite direction -- over to Pak Tso Wan (AKA Italian Beach) over in southwest Cheung Chau.  Partly because this smaller area of the island didn't seem half as full of garbage as Coral Beach and in part because there were more volunteers around this time out, I really could see that the beach was quite a bit cleaner after we had labored for a few hours in hot sun and also under clouds as well as were showered upon on a couple of occasions -- and boy, did this make me feel good!

Over on Coral Beach last month, I had been shocked to not only find lots of glass shards on the beach but also whole test tubes and bottles that looked like they were meant to contain medication.  This time around, I found less glass about but, equally -- if not more -- alarmingly, lots more plastic materials and styrofoam, both of which easily break into little bits after baking for a time in the sun.

Sometime back, I read about how the tiny bits of plastic found in the ocean are liable to be swallowed by various sea creatures, including those that we consume -- leading to the pollutant ending up in our bodies.  When seeing the garbage found on the beach, I also get to thinking of the early scenes in Ponyo, on the Cliff by the Sea showing the horrific mess that trawlers tend to dredge up from the seabeads -- and how it is that pretty much all of it is the creation of us humans.

To this end, I make it a point to get as much plastic and styrofoam off the beach as I can while carrying out beachcleaning exercises.  Something else that I target are the broken pieces of glass that dot the ground, since there have been too many times when I've been barefoot on a beach in Hong Kong and found myself worrying that my feet'd get cut by the shards I can't help but spot every few meters that I walk on what on the surface can appear to be truly beautiful beach locales.

At the same time, there's no denying that one can get a disproportionate sense of achievement from getting larger, more clearly visible items off the beach and into the garbage bag.  Some of these objects are on the mundane side and come in the form of such as whole plastic and glass bottles.  More unexpected "finds" on Italian Beach this afternoon included footwear, ranging from an adult-sized sneaker to a child-sized plastic sandal!  Then there's what strikes me as really disturbing to find on a beach in Hong Kong: items such as syringes, which get me thinking less of drug users and more of medical waste that should have been disposed of in a much more responsible way than it has been.

But when the pollution I see threatens to make me despair about humankind, I get to thinking of the people who volunteer to help clean up the beaches.  As one beach cleanup participant remarked to me last month: "Isn't it amazing to think that people are willing to do this kind of labor for free?"  Alternatively put: humans really aren't all bad, there's hope for this world -- and long may that be this way! ;b
Posted by YTSL at 11:36 PM

I've been reading about plastic micro-beads from cosmetics settling in the Great Lakes. So much pollution everywhere! Your beach clean-up is a great idea.

Thanks for the visit ;)

Yes, so much pollution everywhere -- and while much of it is created by greedy corporations, quite a bit also is the work of irresponsible individuals. Re beach cleanups: we were discussing yesterday about the need for hill and mountain cleanups... :S

Hey so you were part of the 'Yellow' team help in cleaning up, although you were 2,000km+ away!!
Happy Merdeka Day : )

Great job! Amazing what washes up on the beach.

Reading about your beach cleanup, I began thinking about the floating waste in the oceans, such as the "Great Pacific Garbage Patch" or "Pacific Trash Vortex", stretching from the West Coast USA all the way to Japan - a massive gyre of plastic and other debris...This was a rewarding Saturday for you and a rewarding experience for anyone reading your entry.

It was a busy Saturday. After the beach cleanup and lunch on Cheung Chau, rushed over to the Bersih event in Wan Chai! So come to think of it, I was "bersih"-ing in more ways than one that day! ;b

Thanks -- and amazing AND scary what washes up on the beach! :S

On the ferry to Cheung Chau (and from it), I saw stuff like plastic bags and styrofoam floating on the water. It made my heart fall but also made me more determined to try to help get some stuff out of the beach so that they wouldn't go back into the sea!