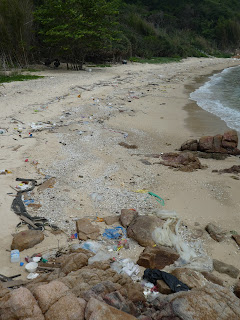 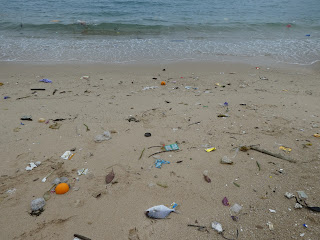 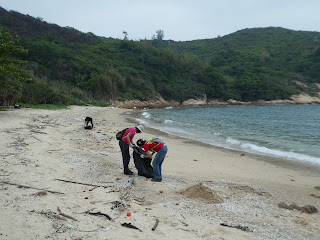 On days like this, efforts to clean up the beach can feel like
a Sisyphean task -- but some of us try to do so just the same...
A terrible sight greeted today's beach clean-up crew when we got to Cheung Chau's Tung Wan Tsai (Coral Beach) earlier today.  For the tides had washed up so much trash in the one month since my group was last there -- and, I have been told, another beach clean-up event had been separately effected -- that it was hard to believe that this was the same beach that I've been organizing monthly beach clean-ups of and at for some time now.


I had prioritized picking up broken pieces of glass along with pieces of styrofoam and plastic items earlier on when taking part in beach clean-ups (on Cheung Chau and also Lantau Island's Chi Ma Wan Peninsula).  But the sheer amount of styrofoam and other plastics found on Tung Wan Tsai since my beach clean-up group returned to concentrating our efforts there has prompted a narrowing of my focus to clearing those particular types of trash off the beach, and preferably before they disintegrate into pieces so small they're hard to separate from the sand and pick up.


Today, there certainly was no lack of still whole plastic items (including -- but by no means restricted to -- drinks bottles) along with fairly large pieces of styrofoam and so much more strewn about the area.  What's more, during the time that my group was working away on Tung Wan Tsai, the tide kept on bringing up more and more trash; making an already formidable task feel truly Sisyphean!

Adding to my frustrations on this occasion -- and further threatening to make me lose my faith in humanity -- was that today's beach clean-up event had an over 50 percent rate of "no shows" among the registered participants.  I guess those folks who didn't turn up thought it was going to rain during the beach clean-up because it was indeed pretty gray this morning.  The fact of the matter though is that it didn't (as correctly forecasted -- for a change! -- by the Hong Kong Observatory).


On a more positive note: this makes me even more grateful to the valiant few who did turn up to do their bit, beach clean-up veterans and newcomers alike.  Also, for the first time ever, two strangers who happened to be passing by stopped mid-hike to help clean the beach for a time!


On the seventh anniversary of the 2011 Tohoku Earthquake and Tsunami this past March 11th, the inspirational Funassyi Tweeted a message which Funatomo Makiko Itoh translated into English as follows:
Don’t say ‘this is all I can do’‬
No matter how small, no matter how little
If we can keep supporting each other
This year and next year and after that too
That would be a good thing nassyi. (。゜▽゜)
To not forget is important too nassyi~*


Words to live by (including for beach clean-ups), I reckon... for humans and pear fairies alike!  So, while it certainly does have its demoralizing moments, I intend to keep organizing and taking part in beach clean-ups for a while to come!
*For those who didn't realize: Funassyi has a tendency to end sentences with the Japanese word nassyi (Pear) on account of its being a Japanese Pear Fairy ;)
Posted by YTSL at 11:59 PM

What a wide variety of crap the tide left on the beach!! Kudos to you for your diligence in organizing monthly clean ups. I can understand how discouraging it must seem at times.....both with the number of workers who show up and the amount of recent garbage. How great that two hikers stopped and helped.

Thanks for your empathy! It can indeed be discouraging -- and frustrating -- but for now, at least, I'm determined to keep up the beach cleaning and I must say the amount of trash bags we fill by the end of each session, even if just a few of us are there, is something I take some comfort and encouragement from.

I have once seen drown pigs being washed onto the rocky shores of Northern Peng Chau back in the mid 1980s. Those may have escaped from their transport ships while in transit. On the other hand, dead fishes and the remains of other sea dwelling creatures are quite common on shores. They stink but they are not what worried me as they are bio-degradable.

I think you've mentioned those drowned pigs before. I'm glad I've never seen such a sight. With regards to the dead fish: what worries me is far less the stink and more what causes their death. In particular, I've tended to see dead fish wash ashore after red tides and now also tend to wonder if their death came from their having ingesting too much plastic...

Thanks for doing this.

Thank you for the appreciation!