Critter spottings on a hike from Shek Kong to Ho Pui 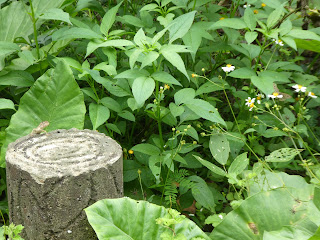 Can you see the two critters in the above picture?
(You may need to click to enlarge the image ;b) 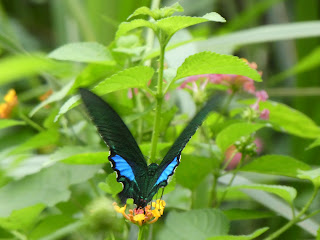 Is that a Paris Peacock I see before me?
After not going out hiking for weeks, I've now been out hiking twice this week!  What's even more amazing is that, despite the Hong Kong Observatory's forecast for today having included showers and even thunderstorms (and it in fact having rained in a large percentage of Hong Kong), I didn't feel more than a few rain drops over the course of the 7.8 kilometer hike that I went on over on the northern edge of Tai Lam Country Park!
Upon checking the weather forecast earlier in the week and seeing what had been predicted for today, the two friends and I had come up with a contingency plan to go for yum cha at Chuen Lung if it was raining when we met up at Tsuen Wan West (from where we would be boarding a bus to take us into the countryside to the north).  But since conditions were on the clear (even if overcast) side when we met at the appointed place and time, we opted to stick to our plan to go hiking; with the chosen route from Shek Kong to Ho Pui being entirely paved, flat and wide -- and thus easy enough to go along with umbrella in hand if the need did arise.
While it may be on the physically unchallenging side, the trail we went along is by no means uninteresting; what with it passing by the Farm Milk Company (where one can get fresh milk and milk pudding), an eco-garden that's home to lots of flowering plants beloved by butterflies, a couple of irrigation reservoirs and a small but pretty waterfall.  Indeed, I like it so much that I've been along it around five times now (albeit with minor variations in the route on a couple of occasions)!
With abundant foliage growing in the area, I find this shady trail to be particularly pleasant during the times of the year when the sun is likely to shine pretty fiercely.  Something else that makes this unnamed trail attractive to me in the warmer months is that lots of critter spottings can be made; with way more butterflies being spotted on today's hike than the one I went on in Tai Tam Country Park earlier this week.
Among today's critter spotting highlights were a couple of eye-catching Paris Peacock swallowtail butterflies, grasshoppers camouflaged to look like chunks of wood and one of those long-tailed lizards whose tails are around three times lengthier than their bodies.  More than incidentally, the lizard was spotted in fairly close proximity to a small butterfly which my friends and I were thinking might have been the reptile's intended meal if not for our presence having made it decide to turn tail and disappear into the undergrowth away from our prying eyes!
Posted by YTSL at 11:59 PM